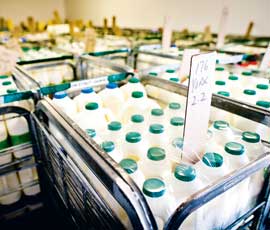 Retail milk prices are at their lowest for seven years and processors have forced further swingeing price cuts on thousands of dairy producers.

The cuts of up to 2p/litre from 1 August, announced in the past few days by Wiseman, Dairy Crest, Arla and First Milk, come on top of those imposed in June for milk producers on non-aligned contracts.

“Something has got to give. There is a limit to which they [processors] can keep cutting milk prices to farmers without jeopardising future supplies,” said DairyCo analyst Patty Clayton.

Reversing a 10-year trend, the average retail price for liquid milk in multiple retailers had fallen sharply over the past three years, said Mrs Clayton.

“Given the strategic importance that retailers have placed on milk and its use to help bring consumers into stores, retailers have resisted any increases in processor selling prices.”

Just who is making what out of milk is becoming more difficult to discover. DairyCo’s annual supply chain margins report is due out later this month but will not be able to break down liquid milk gross margins between processor and retailer for the 2011/12 milk year.

The long-run trend pointed to falling processor margins but the extent of rationalisation in the liquid milk processing sector meant that DairyCo did not have enough data to estimate the margins without breaking commercial confidences, said Mrs Clayton.

“It seems unlikely that processor gross margins would have increased given the continued high levels of competition in the retail market, pressure from retailers to keep processor selling prices down and the increase in average farmgate prices.”

Without significant change in the structure of the liquid milk market, processor gross margins would remain under pressure, said Mrs Clayton.

However cream prices had risen in June, oil prices were down 30% and milk costs had fallen, pointed out consultant Nick Holt-Martyn of The Dairy Group.

“On that basis, we should have had an improvement compared with May. Non-aligned producers are feeling more pain and pressure and will suffer more – the feed market is looking horrendous.”

The latest cuts could be a major factor in decisions to quit milk, but these would not be immediate decisions unless it was something that had already been under consideration, said Mr Holt-Martyn.

“We’ve been here before. If there’s an opportunity for retailers to get a supply of milk at lower cost they will take it, and while processors are prepared to undercut each other for a bigger share, we’ll see more of the same.


For more on milk price cuts:


POLL: What’s your reaction to the price cuts?