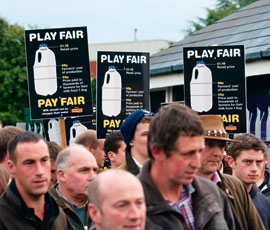 Immediate milk price rises are vital to stave off a repeat of last year’s dairy protests, farm leaders have warned.

The warning comes amid concerns First Milk could be forced to drop the price it pays farmers on its cheese contracts by up to 2p/litre (see right).

According to Farmers For Action chairman David Handley, the industry is in a worse mess now than when the SOS Dairy campaign launched in July last year, and unless price rise announcements for 1 May are made in the next fortnight, FFA will be calling on producers to take direct action.

Despite upward movements in the wholesale cream, butter and skimmed milk powder markets, there hadn’t been real price rises for liquid milk in the past four months, he said.

“We need 2p/litre more for liquid milk and with cheese, retailers need to give some of their margins to the producers,” said Mr Handley.

NFU Scotland also challenged retailers to “play fair on cheese” and warned that processors could be forced to shift milk into alternative products unless some of the gross margin on cheese was passed back to producers.

UK farmer-owned co-operative First Milk has admitted price cuts could be on the cards for cheese producers unless cheese prices rise.


The co-op has made no official statement, but trade insiders say it could cut prices by as much as 2p/litre.


The current manufacturing pool price on cheese contracts is 28.9p/litre.


The company refused to confirm how many of its 1,800 producers are on cheese contracts but said out of the 1.45bn litres of milk procured a year, 35-40% was processed into cheese.


The news comes at the same time chairman Bill Mustoe announced plans to step down in October, after four years in the post.


Mr Mustoe warned it was coming to a crunch point for the British cheese industry, and said money was tight due to large volumes of cheddar imports from Ireland.


“Over the past few months, we’ve supported members to the hilt in terms of milk price, but going forward, returns for cheese need to move substantially and quickly.”

“Retailer attempts to drive value out of the liquid milk chain were exposed last summer and opposed by both the farming industry and the general public,” said NFUS president Nigel Miller.

“Those same retailers are now resisting rises in wholesale cheese prices, pushing cheese processors to consider changes to their business strategy and denying the dairy farmers supply them a fair return.”

According to DairyCo reports, wholesale prices for mature and mild cheddar are at £3,200/t and £3,000/t respectively, with average retailer gross margins of 49% and 47%.

Without a balance of margin in the supply chain, both milk producers and processors were under threat, said Mr Miller, who warned any milk price cuts for those supplying cheese would be “wholly unwarranted and avoidable”.

NFU chief dairy adviser Rob Newbery said the cheese market had been tough for a while due to both competition from Irish cheddar imports and processors competing to get cheese into the food service.

It was a difficult time for dairy farmers across the board, and there was still a clear bridge between farmgate prices and cost of production for many, he said.

“Farmers need to see price rises,” added Mr Newbery. “The price of milk going into cheese contracts now is too low – the fact is that the global price is increasing and stocks are tightening so there is no reason for the price of cheese to be decreasing.”

The dairy coalition had begun a series of meetings with retailers – the first of which was held last week – to encourage them to boycott processors that failed to abide by the dairy voluntary code of practice, and urge them to source and sell British cheese with more margin passed back to producers, he added.