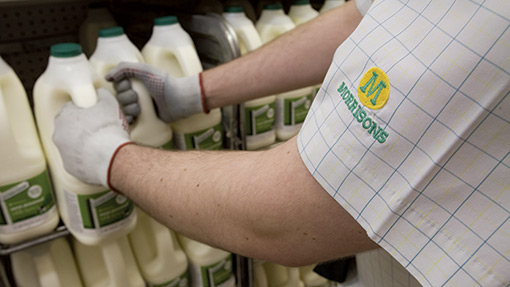 The distribution centre on the outskirts of Northwich is understood to cover 850,000ft and is said to be Morrison’s third largest depot.

Lorries were brought to a standstill for more than four hours as tractors and other farm vehicles were parked outside the depot gates.

Farmers have accused Morrisons of devaluing milk and undermining the dairy sector, with many farmers losing money on every litre produced.

They have also accused the retailer of putting pressure on processors by re-tendering its liquid milk deal. Morrisons current five-year contract is due to end in 2015.

The supermarket chain has responded by expressing “real sympathy” for farmers it says are suffering from “unparalleled movements” in global dairy commodity prices.

Morrisons says it plans to unveil a new-style liquid milk contract aimed at helping farmers cope with sharp ups and downs in prices .

A mechanism to address market fluctuations is said to be “well-advanced” – possibly a new contract to pay farmers a price transparently linked to movements in dairy commodities.

But milk producers remain unbowed, with protests expected to be stepped up over the coming weeks as the autumn maize harvest is completed.

Likely targets include the Co-op and Iceland – the latter which has been selling four pints of milk for as little in 89p in a bid to win customers from its rivals.

Some farmers have clocked up more than 1,500 miles in the past month to join their fellow milk producers at protests from Hampshire to Staffordshire, Somerset and Derbyshire.

But the NFU says blockades are not the answer.

NFU dairy board chairman Rob Harrison said: “Blockading dairies is not a sensible option when, for me, it is not clear how or if it will actually deliver more money for farmers.

“We need to look at what changes are necessary in the industry for farmers to achieve fair and sustainable milk prices, and that is a long-term exercise.”