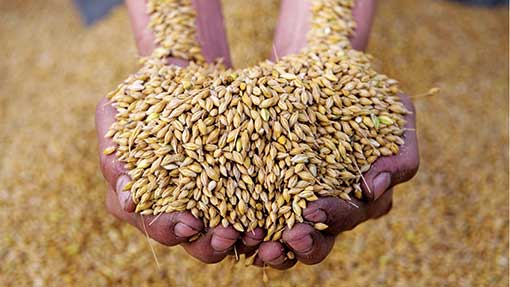 Grain prices continue to be pressured as the world expects bigger harvests.

UK growers are estimated to have sold just 10% of their expected 2014 crop, compared with a more usual level of about 25% by this time in the season.

The recent price pressure has been compounded by stronger sterling, which not only makes the UK less competitive on the export front but is encouraging more maize into the UK for feeding and ethanol production. This in turn leaves a smaller market for the 2013 crop left in farm stores.

“Given the poor price outlook, farmers have decided to hold on till later in the year and hope for a rally. It’s hardly scientific but I can understand why,” said Gleadell managing director David Sheppard.

He urged growers to sell another 10% of their new crop. “With good crop conditions everywhere the downside is clear – any upside will be due to a problem we don’t yet know about,” he said.

New crop wheat was worth between £135 and £120/t ex-farm for November as Farmers Weekly went to press, leaving little if any profit for most growers. New crop feed barley was at £120-130/t for the same month,

Anyone with old crop grain left to sell could hold until April in the hope of seeing a rally, but there was also a risk of no rally, warned Mr Sheppard.

About 15% of the 2014 oilseed rape crop was sold so far, said Gleadell trader Jonathan Lane, which was in line with the normal pattern. However, there was a big trend towards pool marketing.

Estimates vary from 15 to 20% as to how much old crop wheat is left to sell. Much of what is left will be milling wheat which faces import competition. This market is under pressure from maize imports, cheap feed barley and feed oats.

Between July and November last year, 740,000t of maize came into the UK compared with 540,000t through the same period of 2012 and 390,000t in 2011. HGCA senior analyst Jack Watts said that there was a risk that these high maize import levels would result in a carryover of maize stock which would hang over the new crop market.

EU bioethanol producers are under pressure from overcapacity and the threat of imports of US bioethanol.