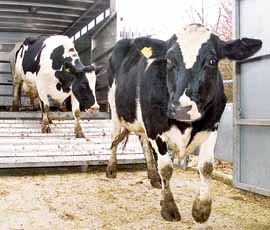 In 2011 average dairy bred cull prices traded above 100p/kg for the first time since 2009, leading to an 18% increase in throughputs at GB abattoirs, said a report by DairyCo. Values had continued to improve this year, setting a new record average of 113.77/kg in the week to 7 February.

And the outlook remained buoyant due to tight continental supplies, with strong exports to non-EU markets combining with reduced imports. “Ongoing supply shortages are expected to keep supplies tight on the Continent, resulting in strong demand for UK beef. The strength of the euro against the pound has also increased UK demand for home-reared animals.”

DairyCo expected cull numbers to decline this year, albeit remaining at relatively high levels compared to pre-2011. Despite higher culling, UK daily milk production for the fortnight to 28 January was 1.6% up on last year, suggesting that the move to a younger national herd had been beneficial to national productivity.

Read more market reports on our Prices and Trends page.