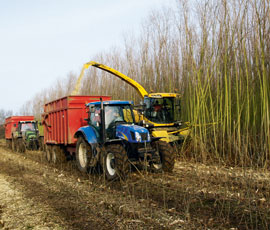 The £860m Renewable Heat Incentive (RHI) is the world’s first financial incentive of its kind and aims to reduce the UK’s reliance on fossil fuels and cut greenhouse gas emissions.

It will encourage installation of equipment such as biomass boilers, solar thermal panels and ground source heat pumps in domestic and commercial properties and could have real benefits for rural businesses. Here’s how it will work.

The RHI will provide eligible claimants with index-linked quarterly payments for the renewable heat produced from qualifying technologies (see below).

These “tariffs” will be paid for 20 years from joining the scheme, provided claimants demonstrate a use for the heat produced. The RHI will also be available to anyone who has installed eligible equipment since 15 July 2009.

Proposed payment rates for different technologies are shown in the table below and will be based on metered heat output – these figures are subject to parliamentary approval and could change.

The government plans to introduce the RHI in two phases. Phase one will begin this July and will focus long-term tariff support on the industrial, business and public sector. This initial phase could be targeted at those off the gas grid.

As part of the first phase, Renewable Heat Premium Payments will also be introduced for the domestic sector. About £15m has been set aside for these direct payments to subsidise the cost of installing qualifying renewable heating systems.

In phase two, tariff support will be extended to domestic properties in October 2012.

Speaking at the launch of the RHI last Thursday (10 March), energy secretary Chris Huhne said he wanted to “kick start” the uptake of renewable heat technology in the UK. But he warned that if uptake exceeded expectations and tariffs were deemed too attractive, there would be a stepped reduction in tariff levels in the future. Details of this “deployment-based degression” will be published later this year.

“At the moment we’ve got a target rate return of 12%, based on the current cost of this technology. This is already pretty good and about three-times what you can get on government bonds. We expect as the industry grows, the cost of this equipment will come down and, as it does, the tariff will appear even more attractive,” he said.

Can I claim RHI and a Feed-in Tariff?

Where heat and electricity are produced together, from a combined heat and power (CHP) plant, for example, guidelines state the RHI “will not contain any limitations on receiving RHI for renewable heat where (CHP) installations are receiving FiTs for renewable electricity”.

However, any heat used for electricity generation will not be eligible for RHI support. Also, installations will not be able to claim both renewables obligation CHP uplift and RHI support.

Rural communities in particular could benefit from the RHI, especially as many homes and businesses are not connected to the gas network and have a limited choice of fuels.

NFU chief renewable energy adviser Jonathan Scurlock welcomed the RHI announcement and said many technologies had a natural fit with farm businesses. For example, dairy units may be able to use solar thermal for heating water in the parlour, many farms have a ready supply of wood coppice or straw that can be used in biomass boilers, and others may be able to use ground-source heat – although this tends to require larger areas of land. There could also be scope for individuals or groups to supply heat to local communities through district heating networks, but there was little detail about how this would be supported.

Lucy Hopwood, head of biomass and biogas at the National Non-Food Crops Centre, said the greatest opportunity from the RHI appeared to be for small and medium-sized dairy or pig farms in rural areas off the gas grid.

“A dairy farm with 100 cows plus followers could generate enough heat from slurry and a small amount of silage for the farmhouse and adjacent buildings or farm offices.”

However, the tariff for biogas combustion on-site was limited to 200kWth, which excludes larger livestock units and plants using a higher proportion of non-slurry material with greater gas yielding potential, she said. “The intention is to introduce other technologies and scales to the scheme from 2012 and this may well be one, provided sufficient evidence is available to justify the cause.”

While the government recognises that farm-scale biogas facilities may require some energy crops in combination with slurries, it does not want to encourage energy crops-based anaerobic digestion (AD), particularly where these are grown at the exclusion of food crops.

“If evidence shows there is a large-scale use of crops in AD and a resulting conversion or change in land used for crops to support AD, then measures will be considered to address this,” the Deparment of Energy and Climate Change said. “The government will be investigating possible measures to exclude from RHI support, the large-scale use of energy crops in AD.

“We’re thrilled to see the coalition government pioneer a new approach to renewable heat and envisage it being adopted elsewhere in Europe. It is essential the support levels are sufficient to drive rapid expansion when the scheme goes live in July.”

“The Renewable Heat Incentive is very close to the scheme we advised the previous government to put into operation. Coupled with the coalition’s backing of £860m from the Comprehensive Spending Review, the rural economy will reap huge benefits from the RHI.”

“The RHI should assist in accelerating deployment by providing a financial incentive to install renewable heating in place of fossil fuels. However, all involved in the energy sector sincerely hope that once the RHI commences we don’t end up with a premature review like the Feed-in Tariff. Such a move simply dents investor confidence and affects development timescales.”

“It is interesting the RHI will only be available for biogas combustion schemes under 200kWth. I hope larger anaerobic digestion projects have been excluded because the AD feed-in tariff, which is currently being reviewed, is set to increase.”

“The [RHI] announcement also discourages energy-crop only AD plants… Businesses looking at crop-fed AD models that rely on large tracts of land for dedicated energy crops will need to carefully consider the implications of this statement.”

“Support of heat from anaerobic digestion is welcome, but proposals to possibly exclude ‘energy crops’ if too much land is taken away from food production creates uncertainty. Many on-farm systems will need to add a supplementary feedstock alongside slurries and a possible change in policy in the future makes the investment decision harder.”

• Applies to new systems and those installed since 15 July 2009

• Payments based on metered heat output – heat must be “useable”

• Tariff rates banded depending on size and type of technology

• Heat for electricity generation not eligible and some technologies also excluded

• Scheme due to remain open until 2020. Scheduled review every four years 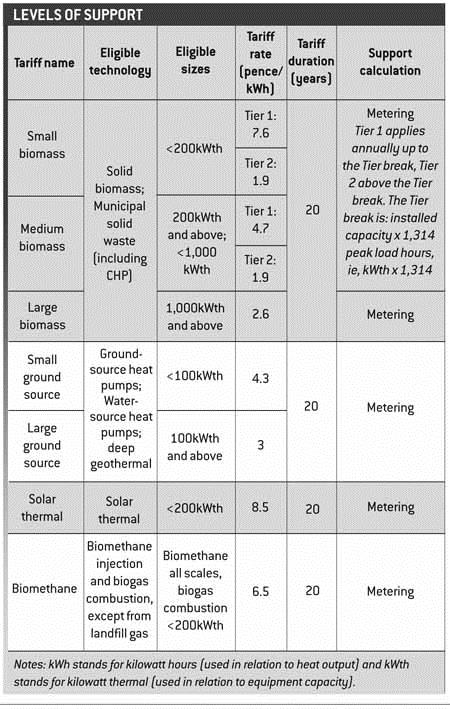