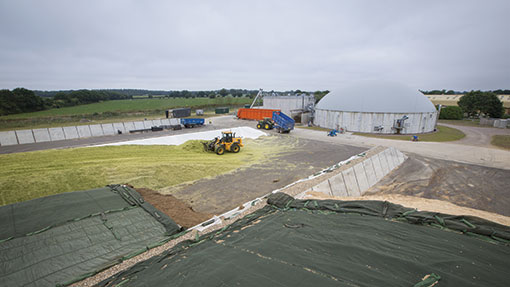 A report from the National Non-Food Crops Centre (NNFCC) highlights the strong rate of growth in anaerobic digestion (AD) capacity.

Anaerobic digestion deployment in the United Kingdom shows there are 138 operational plants and 341 in development, most of these on farm sites. The figures do not include sewage-based AD plants.

The report gives a regional breakdown of AD development in Northern Ireland, Scotland, Wales and the 10 regions of England, providing detailed information on feedstock requirements, installed capacity and output type for every project.

Deployment is strongest in the east of England, while the North East has the fewest plants and distribution across other regions is broadly equal.

“While the development pipeline is strong, there are considerable challenges ahead for the farm-scale AD sector,” he says.

Securing feedstock supplies beyond an annual commitment was one of the key factors and  an area in which funders are showing increasing interest. As capacity grows and support reduces further, feedstock will gain greater importance, says Dr Goldsworthy. 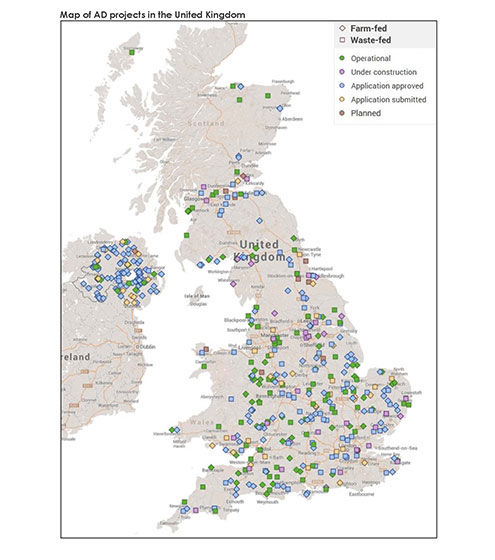 The plants already in operation are calculated by the NNFCC to need 17,000ha of land a year to provide crop-based feedstock, assuming an energy crop yield of 45 fresh tonnes/ha.

The complexity, planning and finance requirements of AD mean that only around 30-50% of plants in the pipeline are expected to complete, but if all those under development went into production, the UK AD industry’s land requirement for feedstock crops would rise to 60,000ha by 2017.

This represents about 1% of the UK arable land area and would generate enough electricity to supply about 250,000 homes, said the report.

Most farm-based AD plants are 500kW and under. Development of these projects is under extreme pressure because of cuts in their Feed-in Tariffs rate.

Although government support for AD has fallen as installed and pre-accredited capacity has grown, equipment costs are also falling, says Dr Goldsworthy.

The report gives detailed information on installed capacity, feedstock requirements and estimated cropping area for plants in the NNFCC anaerobic digestion deployment database, which is updated monthly and tracks projects from the first public announcement through to operation.

It is available from the NNFCC Biocentre, York Science Park, Innovation Way, York YO10 5DG. Call 01904 435 182 or email the centre on enquiries@nnfcc.co.uk