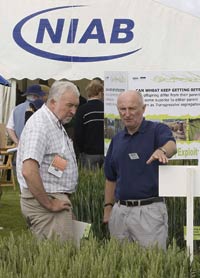 NIAB and The Arable Group have announced plans for a merger to form a single national centre for crop research.

NIAB chairman Tony Pexton said talks between the two organisations were at “an advanced stage”, subject to outstanding due diligence procedures.

“Both boards feel it will be a very constructive move for the industry,” he told Farmers Weekly on Wednesday (13 May). “The combined work of NIAB and TAG will help join what is currently a disjointed pipeline between science and the farmer.”

He said the proposed merger would result in synergies between the two organisations, cut duplication of work and put the combined organisation in a stronger position when tendering for new research projects.

There are no details of how the merged organisation will be structured, or when the planned merger will take place.