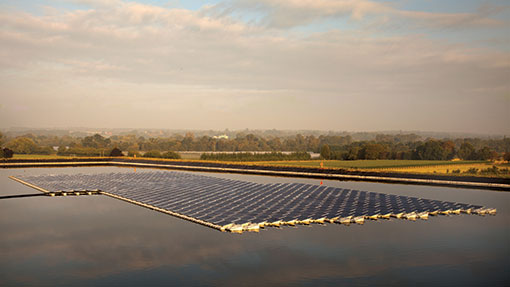 Mr Bennett has just built the UK’s first floating solar farm on a new 60m-litre irrigation reservoir at his Sheeplands Farm near Wargrave.

The 200kW array was commissioned last month and features 800 Trina panels mounted to Hydrelio high-density polyethylene floats used in marine buoys. These join together to form a floating pontoon covering almost an acre of water.

“We initially looked at ground-mounted systems, but realised it didn’t make sense to take out agricultural land when there’s a large area of ‘dead space’ on the reservoir. I did some research and came across this floating technology,” says Mr Bennett.

A specialist soft fruit company rents the core farmland (100ha) on a long-term arrangement and extracts irrigation water from the reservoir as normal. Reduced-rate electricity from the panels is sold to the fruit grower on a power purchase agreement (PPA) to power four irrigation pumps, with surplus electricity exported to the grid.

The project cost £250,000 and was financed through a loan from the Agricultural Mortgage Corporation (AMC). Mr Bennett estimates annual returns from the Feed-in Tariffs (Fits) will be worth £18,450/ year for 20 years (this assumes 90% efficiency), plus there will be an additional income of £24,000/year from electricity sales.

The project could pay for itself within six years, he suggests. “Even if we weren’t selling electricity on a PPA and were just exporting to the grid at 4.7p/kWh, we’d still be looking at a total income of about £30,000/year.”

Planning permission was achieved in four months, although Mr Bennett expects the process would be quicker now as his system was the first of its type in the country. Installation took just under a week, as no groundworks were required.

The French firm that developed the floating PV system, Ciel et Terre, claims the cooling effects of water increase efficiency over rooftop or ground-mounted systems of the same size. Mr Bennett says this performance uplift happens mainly in hot conditions, when a 12-14% increase in output is possible.

Covering the surface of reservoirs with panels also reduces evaporation losses and algae growth, he says.

Ciel et Terre says its system can withstand winds up to 118mph and changes in water levels of up to 6m (20ft).

The area covered by the array must be no larger than the base footprint of the reservoir, so if the water dries up, the system will sit on the reservoir floor.

Mr Bennett has signed up with Ciel et Terre to distribute its technology in the UK through his new company, Floating Solar UK.

Systems can be bought outright, or suitable lakes and reservoir surfaces can be leased out for £2,000-4,000/year (depending on site characteristics and grid connection), with the opportunity for the landowner to buy electricity at a 40% discount to conventional grid supplies. Systems of 50-100kW are the smallest currently feasible on water, says Mr Bennett.