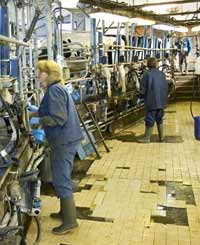 Retailers have been slammed for renewing a milk price war when dairy farmers are leaving the industry at almost a record rate.

NFU Scotland criticised supermarkets for slashing milk prices while a “dairy exodus” was taking place as farmers were forced to sell their herds because of poor milk prices and an inability to invest.

According to the union, a price war had erupted over the past two weeks as retailers tried to compete with discount supermarkets.

While milk sales had increased by 0.8% since 2006, discount retailers had seen their market double, sparking a reduction in prices.

The price cuts came as the number of dairy farmers in the UK fell by 4% in the past year to 16,030. According to the Scottish Dairy Cattle Association, 38 herds were dispersed in Scotland during the first half of the year, compared with 41 in the whole of 2009.

The figures mean it was the second-fastest fall in the number of dairy farmers – the record being in the 1970s when numbers fell by 44%.

“When will supermarkets learn that if they continue to pay their dairy producers less than they need to survive that they threaten the future supply of fresh milk?

“We have heard numerous statements from retailers of their intentions to work with the industry for the good of all concerned, but price turf wars such as this show their priorities lie elsewhere,” he added.