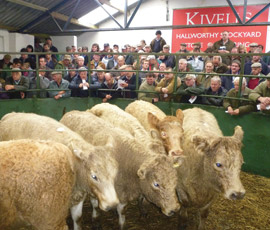 A small entry of 94 TB-restricted cattle sold to an electric trade on Monday (17 June). Top price of £1,555 went to a smart British Blue cross steer from HL Banbury & Sons, who, with their consignment of strong forward cattle, saw plenty of trade. Another of their British Blue cross steers sold for £1,485, with a pair of Limousin cross steers fetching £1,375. A run of Friesians reached £1,370, with another bunch at £1,300.