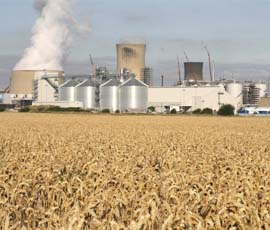 Europe’s largest wheat bioethanol plant is to shut down operations temporarily from the end of this month due to the rising cost of grain.

The Ensus plant on Teesside began production last spring and was due to take over 1m tonnes of UK feed wheat when at full capacity. But a spokesman for the company confirmed today (13 May) that production would stop for two to four months from the end of May, in the hope that grain prices would come down by the autumn.

A statement said: “Ensus remains committed to operating and growing our European business. However, to ensure the long-term health of the business for both our customers and our employees we have decided to temporarily shut down our facility while market conditions remain depressed.

“We fully expect the market to improve in the coming months as implementation of the regulatory framework for biofuels catches up with the agreed EU legislation.”

The plant has been dogged by complaints about the smell from the site since it began production, although Ensus chief executive Peter Sopp said this was unrelated to the shutdown.

“There is no connection,” he told the local Evening Gazette. “Implementation of the Renewable Energy Initiative has been slow and at the moment the margins are just not sufficient for us to continue running. We are confident in the future of the business in another two to four months, but we have to come off for a short period.”

It is understood that staff will remain employed at the site, but switched to other duties.