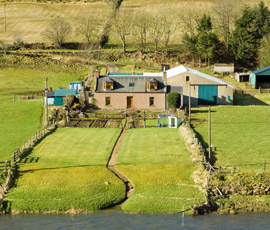 One of the best known farms in the Inverurie area of Aberdeenshire is up for sale with a guide price of £650,000.

There is also a historical link to the Battle of Inverurie in 1308, through Bruce’s Cave on the banks of the Don, where King Robert the Bruce is alleged to have hidden.

The farm, which has been in the same ownership for almost 100 years, has a four-bedroom house and a good range of outbuildings. Field sizes make it suitable for a sheep operation, the agents say. (Aberdeen & Northern Estates 01467 623 811)

South of the border, Northwood Farm, in Devon’s Teign Valley at Chudleigh, Newton Abbot, is now – after two or three years of testing the market – a retirement sale, this time with a slightly reduced £830,000 guide price and retaining salmon and trout fishing rights.

It includes 75 acres, a four-bedroom farmhouse for modernisation and traditional buildings. (Stags 01392 680 059).

Tips on selling land for development