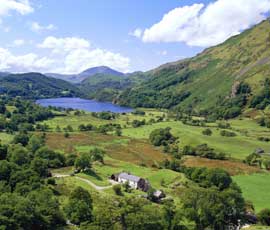 Farmers should be given the option to enter part of their farm into Glastir rather than their entire holding, according to CLA Wales.

Many farmer are put off the scheme because they do not want their whole farm restricted by the compulsory requirements under the whole farm code, said policy director for Wales Sue Evans.

“We are therefore recommending a part-farm scheme should be available to all farmers and land managers. This would bring in additional high value habitat from farmers who would otherwise not consider entering Glastir.”

The CLA has put forward 14 recommendations for amendments to Glastir, including the suggestion that there should be a change in how payments are calculated, moving away from the profit foregone model.

Ms Evans said the organisation felt there was a lot of scope for improving the scheme.

“We want the Welsh government to amend Glastir so that farmers can put their efforts into enhancing their most valuable habitat land, and be left to produce food without additional barriers on the most productive land.”

Meanwhile, CLA Wales and the Game and Wildlife Conservation Trusts have revealed they are joining forces to push for policies that will reverse species decline in Welsh moorlands.

The two organisations said the loss of bird species in the Welsh moorlands was ‘alarming’ and was linked to a failure to support grouse moor management.

In the North of England where areas of moorland are being managed for grouse then there are still good populations of bird species such as red grouse, black grouse, lapwing, golden plover and curlew.

Work at the Ruabon Moor near Wrexham had also demonstrated that managing a moorland for commercial shooting, which involves predator control, could lead to big increases in curlew and golden plover, in addition to black grouse, said a GWCT spokesman.

“We know a number of people who have looked to invest in the sporting potential of Welsh high quality moorland habitats and we must do everything to encourage them to do so,” added CLA Wales director Ben Underwood.

See all the news live from the Royal Welsh Show 2013