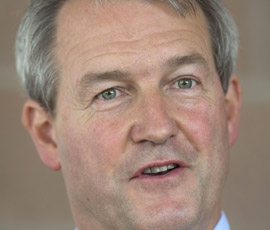 A new UK-Russia food and drink trade deal could be worth up to £100m to British farmers over the next three years, says DEFRA secretary Owen Paterson.

To mark the breakthrough, Mr Paterson will lead the largest ever British food and drink delegation to Russia next week.

Ahead of the trip, he urged farmers to seize the many opportunities to trade with Russia. “I hope the British beef and lamb industry will pile in and grab these opportunities which are opening up for them,” said the minister.

Mr Paterson will be joining UK food and farming representatives, members of beef and lamb industry, Eblex and others at the World Food Exhibition in Moscow to promote the best of British food.

He will be finalising details with Russian authorities about opening up trade to British beef, lamb and offal, while also focusing on ways to help promote other niche products, such as Scottish whisky.

Mr Paterson said officials from DEFRA and the UK embassy in Russia would be working with UK producers to break down trade barriers.

But Mr Paterson said the trip would not just be about the promotion and sale of British produce.

“Russia has been monioring something like 70 animal health diseases. I am very keen to work with other countries on animal and plant health diseases,” said Mr Paterson.

Last November, Mr Paterson spent four days promoting UK food and drink in China in a bid to boost trade with the Chinese, in particular chicken, beef and lamb exports.

Russia, like China, India and Brazil, is seen as a great opportunity for British exporters as demand for western food is soaring. Last year, UK exports to Russia grew by 11.7% to £5.6bn.