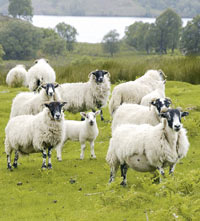 New export markets for Welsh lamb are being developed due to growing interest from the Chinese government in Welsh food.

Rees Roberts, chairman of Hybu Cig Cymru (Meat Promotion Wales), welcomed a delegation from the Chinese embassy at this year’s Royal Welsh Show, giving Chinese officials the chance to see for themselves the very best Welsh farming had to offer.

Delegates from the Chinese embassy, including a government minister, also met Wales First Minister Carwyn Jones at the show. “Exporting Welsh lamb to places like Hong Kong and Dubai already makes a valuable contribution to our economy, but it would be great to see it exported further afield.

“Following their visit to the Royal Welsh, I hope our guests will be pleased with what they have seen and will want to make Welsh lamb available in mainland China, one of the largest consumer markets in the world.”