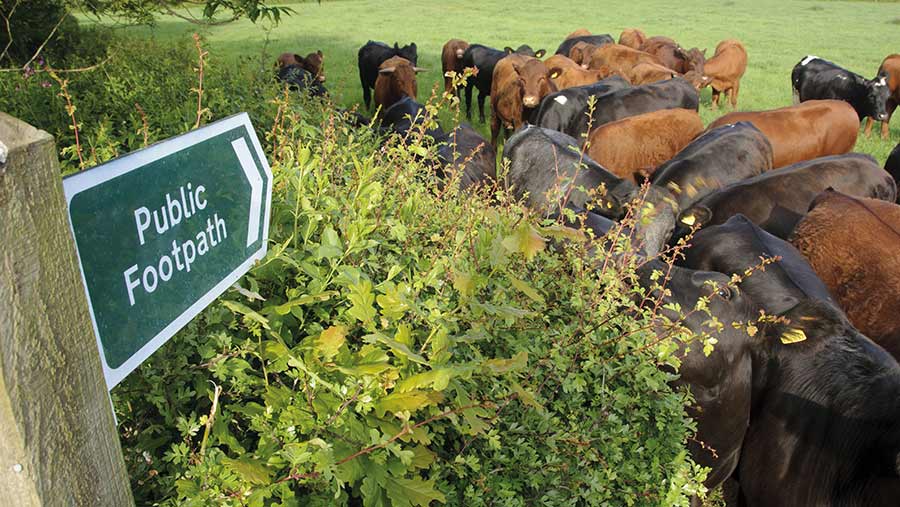 Rural groups have called for farmers to be allowed to temporarily divert rights of way after a spate of accidents involving walkers on farmland.

Two walkers have been killed in recent weeks after coming into contact with livestock and many more members of the public are injured crossing farmland each year.

The proposed change would give farmers more flexibility than the law currently allows, enabling them to change rights of way for public safety reasons. However, it requires an amendment to the Highways Act 1980.

The existing process for permanently diverting public rights of way does not provide sufficient flexibility to allow for temporary route changes, they say.

The process is complex and bureaucratic and poorly adapted to provide the necessary flexibility for agricultural operations, says their letter, adding that some Highway Authorities have backlogs of orders for footpath diversions stretching back decades.

“The cost of permanently diverting a right of way can run into thousands of pounds.

“Local authorities can charge for their administration costs in making the order and the landowner would usually be expected to pay for the diversion works as well,” said Ms Dwerryhouse.

Meanwhile, trials of an alternative system known as ‘permissive paths’ have also proved unsuitable in many cases.

Under the permissive paths trial, landowners provided an alternative route for walkers.

“However, although permissive paths are a potentially useful option, the original route must remain open,” Ms Dwerryhouse said.

Giving walkers the choice to walk the original route meant many would continue to do so and still left them exposed to the potential risk.

It also meant walkers could be crossing the farm on multiple routes, exposing the landowner to even greater liability.

The current options to divert a footpath temporarily are limited. Farmers can apply for a temporary diversion for dangerous works. However, these only extend to 14 days in any single year.

The complications mean very few landowners even try to have footpaths diverted, so the public remains at risk and farmers face additional difficulties in rotating stock.

Any system of diverting footpaths needs to be practical and flexible to fit in with management plans. For example, to allow stock to rotate through fields.

“Our proposal would be to allow a temporary diversion of up to 40 days in any 90-day period,” said Ms Dwerryhouse.

The 90-day limit would ensure that landowners could not implement successive diversions.

Landowners would be required to give 14 days’ notice to the local authority. But the existing requirement of advertising the application in local newspapers would be dropped.

“Advertising is an unnecessary hurdle because its effectiveness is limited,” she said.

Signs explaining the change and a map of the alternative route would have to be posted at each end of the closed access.

Other stipulations include that the route should be like-for-like. That is, a similar distance and no less accessible.

For example it would not be acceptable to swap a route with accessible gateways to one which had stiles that might preclude use by people who were less able.

You can download a PDF of HSE Agriculture Information Sheet No 17EW(rev1) for more information on footpath safety.