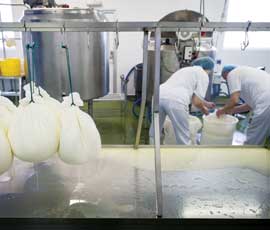 Meeting the requirements of large national buyers can seem a daunting experience for many small and micro-sized businesses. Producers with no previous audit experience are often confused by the options available for gaining approval with national or regional buyers.

Launched in 2007 as a scheme which integrates producer support – or mentoring – with certification, the Safe and Local Supplier Approval (SALSA) was set up specifically to address the needs of smaller food producers wishing to gain a valuable food safety certification.

SALSA is a web-based scheme with all operations directed from its North Oxfordshire base, with a network of more than 60 local auditors and mentors.

It is a non-profit making joint venture between the four main trade associations representing the UK Food Chain (The NFU, Food and Drink Federation, British Hospitality Association and the British Retail Consortium). The operating body is the Institute of Food Science and Technology.

SALSA and its many members recognise that producing a standard without giving smaller and start-up businesses the tools, tips and resources necessary to reach certification would have missed the point completely.

The optional element of mentoring makes the scheme potentially valuable to smaller producers which cannot afford or justify a dedicated food safety resource which is the norm for larger food businesses.

Mentoring can be particularly helpful for start-ups to help to steer a clear course through to a successful audit and certification. Success means instant access to SALSA’s growing list (currently 525) of big national buyers such as ASDA, Waitrose, Sainsbury’s, the NHS and caterer Elior.

Operating throughout the UK, with members as far and wide as Orkney, the Isle of Man and Channel Islands, producers join the scheme with certification as the ultimate goal.

Certification is designed to be achievable and affordable to any small food producing business however small the size. The scheme recognises cost is a key concern for the smaller producer, and those wishing to take advantage of mentoring support will welcome the news that SALSA members can access local funding which is available for most qualifying businesses.

Membership has grown year-on-year to more than 880 across all sectors, from producers of flour, milk and oils, to bakeries, butchers, ice cream makers, crisp producers and jam and relish manufacturers.

The scheme is open to all sectors, but the producer must be operating from a dedicated commercial kitchen/unit as it is not suitable for home kitchens.

So far, 625 members have gained approval, with the remaining number working towards achieving their initial certification.

In addition to local mentoring support, SALSA members have 24-hour access to a growing library of online resources and a telephone helpline to answer queries or point them in the right direction regarding any SALSA-related issue.

Seventy-five per cent of SALSA’s membership is producers employing fewer than 10 staff. These small businesses, many of them start-ups without previous food manufacturing experience, need to learn quickly to comply not only with the regulations but also the expectations of the national buyers.

Access to mentoring is often an essential ingredient in helping a small business understand and reach the standards required for certification at costs they can afford. This “nurturing” through mentoring is paying dividends for producers.

Once certification has been granted, the company profile for each scheme member is immediately visible to regional and national buyers through the online buyer directory. Buyers are able to download the certificate directly through the company profile. The online directory also enables buyers to search for or uncover a product either locally or nationally, instantly opening up potential new business opportunities for producer and buyer alike.

Chris Grims, SALSA scheme director says: “SALSA has quickly become the scheme of choice for both national buyers and smaller independent producers as we are unique in being able to offer guidance alongside the certification standard.

“The scheme must consistently respond to new regulations such as those on labelling and offer advice for members who require the support. This can be a major concern for the smaller producer wishing to remain in front of buyers.”

In 2008, SALSA formed a partnership with the Specialist Cheesemakers Association (SCA) and launched a unique combined certification to include a special module on cheesemaking.

This has attracted a great deal of support from specialist cheesemakers and their buyers, giving producers the assurances they need to control the risks involved in using unpasteurised milk in their products.

The achievements of the scheme were further highlighted in 2011 when it was formally recognised by Red Tractor Assurance for fruit, vegetables, dairy and some fresh meat products, which meant SALSA-certificated members can apply for a licence to display the Red Tractor logo on their products.

Case study: ‘It gives confidence to our customers’

Dairy farmer and ice cream manufacturer Will Taylor says the process of accreditation was fairly straightforward.

“We’re no Mars or Wall’s so SALSA appealed to us as it’s designed for small and medium-sized businesses,” says Mr Taylor, who farms near Newtownards, in Northern Ireland.

“We had no major problems and it fit in quite well with the things we had already in place.

“We were fortunate that our production manager has an MSc in food technology so a lot of it we already had in place, but it might be more challenging for a farmer who has just decided to add value by going into food production.”

There are grants available from the Manufacturing Advisory Service in England – and similar schemes in Wales and Scotland – to go towards mentoring, which can help businesses who are unfamiliar with food auditing through the process.

“The overall objective for your business is to provide confidence to the customer,” says Mr Taylor. “You only get one chance.

“If something serious goes wrong that affects the quality of your product, you have the confidence completely removed. You’re almost certainly going to fail.

“We might not always like everything they say but it can make a major difference if you’re not accredited”.

“Basically we were being asked by some retailers for some form of certification. The British Retail Consortium accreditation is very expensive, whereas SALSA is designed for smaller companies,” says Mr Kelly.

“Not having the accreditation didn’t stop us selling to all the big retailers, but we’re better off with it.

“We weren’t pressurised into it, but people were asking us and we’ve found distributers and food manufacturers like to see it – they like to see their raw materials are accredited.

“When we start a new contract we can email across the certificate – it’s very simple.”

Both producers found most of the SALSA scheme had already been covered by the HACCP (hazard analysis and critical control points), so only small tweaks were necessary. The businesses are then inspected every year to ensure standards are maintained.

“One thing we didn’t have last time was a blue plaster record, which is only a very small thing we had to put in place,” says Mr Kelly.

“It doesn’t mean the product is superb, it just means the paperwork is up to scratch.”

At £515, including the audit and first year’s membership fee, Mr Kelly thinks it is good value. “As well as the accreditation, food producers benefit from the website which is full of information and allows people to go on and find a supplier, so there’s an element of marketing.”