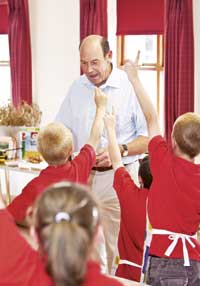 For a man who “only got a woodwork O Level”, Peter Philpot is amazingly driven by the idea of education.

Indeed, the theme of learning lies at the very heart of a diversification business based at Barleylands Farm, Billericay, Essex, which has grown into a very significant enterprise.

With its 60-unit craft village, farm park, education centre and some 50 or so other diversifications, Barleylands has become an attraction centre which is arguably unique. You cannot help but be impressed by the energy and enterprise emanating from a very driven family team and its employees and craft tenants.

Farming with his three sons – Chris, Andrew and Stuart – almost 13,000 acres in Essex and Suffolk, Peter has entrepreneurial genes which date back to shipping in the early 20th century and milk powder production in Scotland in the 1930’s.

“My grandfather read in the paper that they were tipping milk down the river,” Peter says. “He put in a spray plant in Scotland to make the first milk powder in Scotland 1935.”


Through shareholdings and acquisitions the family became involved in protein production by grinding fish and also purchased 1000 acres on Potton Island on the Essex coast, which gave Peter his introduction to farming from which he has never looked back.

While Peter and his sons always have a keen eye for a new deal – “there’s more money in diversification and it will continue to grow”, he says – it’s clear the idea of selling the story of farming underpins much of what they do.


Indeed, Peter’s penchant for collecting vintage machinery became something of a moot point with his sons who believed the kit was taking up useful space in buildings ripe for conversion.

“The boys thought it would be a good idea to go into craft units,” Peter says. “So we had a big sale of machinery and kept the best bits for the farm museum which I had started in 1984.”

It provided the catalyst for a development at the farm which has grown into an education experience which hosts over 5500 schoolchildren a year. “We’re aiming for 15,000 within five years,” Chris enthuses.

By the ’90s, Chris had taken on the responsibility for much of the hosting of farm visits. “I was trying to do the museum and school trips myself,” he explains.

So in 2001 he realised a step-change was needed. “I got our first grant for the first lot of craft workshops to do more education with schools including an education room. We then got a second grant for an education officer, education classroom and discovery centre.” Today, four other part-time ex-schoolteachers also provide support for the school visits.

Visually, the discovery centre is the star attraction. Housing the retained vintage farm machinery – including a fabulous steam traction engine – it presents visitors with an interactive and impressive museum-style experience which has clearly benefited from the Philpots’ obvious passion and a little professional guidance along the way.

“You have to have things children can do and make some noise with,” Peter bellows above the din he’s creating with one of the displays. “It’s very important they know where their food comes from and how it’s grown.”

He also believes it’s important for young people to have a rounded view of modern farm production. “We cannot live on organic stuff alone. Everyone thinks fertilisers and sprays are poisons. We have to educate them.”

While much of the Barleylands diversification business makes a good profit, the education aspect (which has cost more than £650,000) doesn’t yet, although it clearly acts as a draw to the rest of the offering. “We’re putting something back,” Chris says. “We’re large farmers and we’ve got a responsibility. There’s so much bad press. We need to get our message out and tell them it as it is. Hopefully we’re having a positive impact.”

There’s certainly a healthy buzz. Anyone paying the farm a visit will find it hard to avoid the scores of children taking part in a highly interactive day.


“We use agriculture, farming and the countryside as a base for education,” Chris explains. “We work with the schools and create exhibitions to tap into the school curriculum. Teachers say it’s the best trip they go on.”

“In the classroom we link what’s grown with their food and give them an opportunity to cook – who would we be if we told them about these crops but didn’t tell them how to cook?

“In the farm park they see farm animals and learn about husbandry and welfare. Videos show where milk comes from and how crops are harvested. We also take them to see crops. And the discovery centre provides the link to farming through the ages.”

Schools are encouraged to come more than once, she continues. “We suggest at least twice in the farming year.” That way the children can get a better understanding of what happens on a farm through the seasons and can create the link with their food. “In the autumn, for instance, they can dig potatoes and we explain blight to them and how it caused the Irish potato famine.”

Alongside the education centre, Barleylands also runs a highly successful country show entertaining around 35,000 visitors over a weekend in September.

“Ideally I’d like to have the schools to be more involved with the show,” says Peter. “I want them to see how farming used to be – ploughing with horses – and what we do now. We have our machines on display – an old binder, and a 30-foot combine!”

With a growing number of school visits throughout the year, the children and teachers clearly feel Barleylands is good value for money at £5 a head plus £1.50 if they want to include the cooking module.

“We want the schools to think of Barleylands as a resource,” Mrs Watson says. “We want them to keep coming back.”

And with so much to see and take part in, it’s hardly a surprise they do.