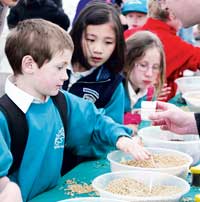 The countryside is awash with banners inviting people to an array of agricultural shows, country fairs, game fairs, horse fairs, produce shows, open gardens and fetes. The great British public has, it seems, an insatiable appetite for all celebrations of the great outdoors.

Some have kept their roots in agriculture and food production, but many have increasingly focused on entertainment and pulled in more commercial stands to appeal to a broader audience.

And while the big county shows attract huge audiences and showcase a broad spectrum of countryside activities, there is a need for more events aimed solely at children.

Us farmers have a part to play in sharing knowledge, re-engaging kids with food and the countryside and presenting ours as a desirable industry in which to pursue a career.

Hannah Woods, The Suffolk Agricultural Association’s education officer, agrees. Together with a committee of volunteers, she organises the School Farm and Country Fair which, unlike the county’s show, is purely about education.

Aimed mainly at seven- to nine-year-olds, it hopes to give every primary school pupil in Suffolk the chance to visit the fair at least once. The fair is free (exhibitors and stewards attend voluntarily) and it even uses sponsorship to fund assistance with transport expenses.

It aims to give children an introduction to the food cycle, from “field to fork” and, alongside learning about the history of farming, there is a conservation area and interactive exhibits.

Organising 3500 primary school children from about 90 schools, 165 volunteer stewards and 80 exhibitors is a huge undertaking. “It couldn’t be done without the help of the planning committee,” says Hannah. “The committee mostly consists of local farmers who each volunteer to take on an element of the fair. For example Livestock, Health and Safety, and so on. It’s a real team effort.”

The event – which celebrated its 10th anniversary this year – is held on the Suffolk Showground at Trinity Park, near Ipswich, which means it has much of the infrastructure already in place, making it easier for the exhibitors who know they will have the appropriate equipment and livestock areas.

All of the exhibitors attend free of charge and have the same aim: To educate and enthuse a young audience. Exhibits range from bread-making to bloodhounds, sausage-making to sheepdog trials, Suffolk Punch horses to enormous combines, but Hannah is always on the look-out for new areas of interest, citing vegetables as an under-represented area at the moment.

Each school group is accompanied by a steward (a volunteer who acts as a guide). The stewards can be very knowledgeable as many have a background in farming or the countryside.

The children take away a wealth of hands-on experiences including holding a day-old chick, which tops their best experience list. One child described the chicks as being “so fluffy, like little hand-warmers”. One of the teachers explained how “so many of the children had new experiences and witnessed things that will stay with them for a very long time”.

Many of the children and the teachers write letters of thanks and describe the event as something they will never forget, one girl saying how she had never even “seen a lamb before, let alone stroked one”. Teachers describe the fact that for some children it is fantastic to simply get them off their housing estate.

All of this arose out of the foot-and-mouth crisis in 2001. That year the Suffolk Show itself had to be cancelled, an unprecedented situation which many found devastating.

The discussions were centred around the need “to do something” and the feeling that children had lost touch with their rural roots. Sir Michael Bunbury, the vice-chairman of the SAA, describes the SFCF as “possibly the only good thing to have come out of the entire foot-and-mouth crisis”.

Long may it continue.

Top Tips For a School Farm and Country Fair

• Set up a committed committee

• Experience of other shows or events a plus
• Find sponsors to fund transport grants ensuring viability for all schools
• Find a site with infrastructure such as the county show ground
• Plenty of goodwill from exhibitors
• Get excellent Health & Safety advice
• Debrief schools, exhibitors and stewards thoroughly
• Use of volunteers keeps costs to a minimum
• Have a timetable but allow the schools to be flexible
• Stick to the education message with careful selection of exhibitors – do not be afraid to say ‘no’ to those that do not fit
• Make exhibits as interactive as possible and suitable for the target age group