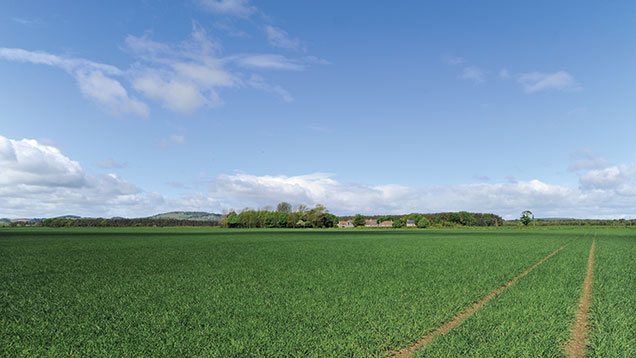 Ahead of the Highland Show next week, Scotland’s land agents are reporting strong demand across the country after an uncertain 2014.

The independence referendum and a nervousness around the new-look CAP had stalled interest in buying farmland. But agents said a more stable market was seeing bigger, well-equipped units being sold to relocating buyers and bare land attracting Scottish farmers looking to expand.

“The referendum affected land, houses and farms, but we’re back to where we were in terms of interest.”

“Demand is spread across the country and the sectors,” he said. “The strong arable interest is in the Borders, Lothian, Fife, Perthshire, Angus and Aberdeenshire.”

Mr Brown said the country’s best arable land was commanding £10,000-£12,000/acre but that location was important, while Mr Mitchell said many potential buyers were coming from a pool of unsuccessful bidders in previous sales.

There is hope for upland farmers too, who could benefit from a rise in land value after the introduction of the Scottish Rural Development Programme.

“Grants are available to encourage large-scale forestry planting, so that will underpin the upland market, providing the land is plantable,” said Mr Brown.

James Butler, associate at Strutt & Parker, said he sold six farms in the first quarter – all to buyers based outside Scotland.

“Average land values still remain lower than in neighboring countries and because of the good climate in agriculture, farmers are keen to get more acres to spread their fixed costs.”

However, he predicted that supply would remain tight, especially for higher quality farms and land.

Cast Farm, near Leuchars, has a mix of silty clay and light loam, which has produced winter wheat at 4t/acre and ware potatoes at 20t/acre.

Some lighter land can also produce soft fruit in polytunnels and carrots.

About 36 acres of permanent pasture is currently used to graze cattle.

Ledlation Farm’s has a number of modern steel-portal framed buildings with capacity for 400 cattle.

The 254-acre enterprise, near Kinross, was bought in August by its curret owners who have since decided it is too far from their main farmstead on the west coast. It is for sale at offers over £975,000.

A grassland farm with a diversified equestrian enterprise is for sale near Gleneagles at offers over £1.45m.

About 200 of Easterton Farm’s 256 acres are currently let out for seasonal grazing.

Everton Farm, near Insch, is a well-equipped mixed enterprise for sale at offers over £1.26m for the whole, or in two lots.

Most of the 242 acres are in arable cropping and three modern steel grain bins have a 700t capacity.

Much of the grassland is stock-proof and qualifies for Less Favoured Area support.

A livestock farm with 285 acres of well-maintained grassland is for sale at offers over £1.1m.

South Medrox Farm, near Glenboig, has seven cattle courts, which can house 400 head.