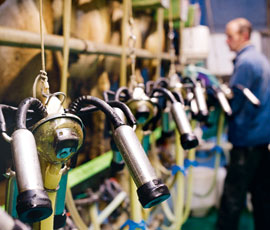 An emergency meeting of over 350 Scottish dairy farmers has given NFU Scotland their unanimous backing to set up a Producer Organisation to market their product and wrestle back control of milk prices.

NFU president Nigel Miller said the unions ambition was to facilitate a body which could market 30% of the UK’s total milk market, which would mean all of Scotland’s 1.3 billion litres plus milk from the north of England.

“In an ideal world we need every eligible Scottish producer to buy in to this and it needs to be bigger than just Scotland . We need the critical mass to give us power.”

Producer Organisations (POs) are being promoted and legislated for by the European Commission to concentrate the supply of milk and increase farmers bargaining position. The maximum volume of milk that can be marketed by a PO is 33% of a Member State’s production.

Dairy farmers who had travelled from every corner of the country to the event at Lanark Mart also voted for their union to fight for legislation for compulsory and equitable contracts .

NFU Scotland president Nigel Miller said the Code of Practice in its present form was just “soft window dressing” but Defra saw regulation as “the work of Satan”. He insisted there had to be “revolution” on that front and the deadline was the first of August.

“We are at a crossroads and there is a real sense of crisis among milk producers. There’s anger, frustration and fear for the future but this is the moment which can crystallise us into taking action.”

Producer after producer called on the industry to unite and dairy producer Ian Smith from Lanark, who resigned as the chairman of the Wisemans Milk Partnership after the last price cut, made a rabble rousing appeal to his fellow producers .

“Give NFUS the mandate to facilitate a PO and this will be a historic day,” he said. “If you don’t you’ll have wasted your time.”

After a show of hands giving him his wish the farmers returned to their cars in the rain, not entirely convinced they understood what a PO was, or if they’ would go any way towards solving the current crisis.

Visit our dedicated page on the milk price crisis

Have your say on our milk price forum