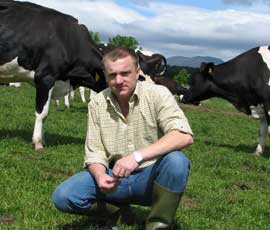 The Scottish red meat industry has reiterated its plea for a change in levy money distribution rules to enable levy from Scottish-reared animals slaughtered south of the Border, to return to Scotland.

“Scotland is currently missing out on £1.4m of lost levy annually. In the meantime, we are witnessing yet more store animals leaving Scotland destined for finishing south of the Border,” said Quality Meat Scotland chairman Jim McLaren, speaking at the Royal Highland Show in Edinburgh.

“While this is welcome in terms of the clear indication it gives of the demand for quality, high health Scottish livestock, it does mean more animals are being slaughtered outwith Scotland, resulting in a further erosion of levy income.”

An added problem, was a continued shortage of livestock to supply Scottish abattoirs, which were already struggling to source the critical mass needed to operate profitably, he said.

“Key to the future is achieving critical mass of raw material and it is vital we maintain the livestock numbers needed to satisfy the demand for our world-acclaimed brands,” said Mr McLaren.

“Part of this solution requires the successful outcome of the CAP negotiations and the ability for Scotland to continue with, or indeed increase, its support for the suckler cow in the form of a coupled calf payment.”

The Scottish farming industry and DEFRA are at loggerheads over coupled payments – Scots farm minister Richard Lochhead has repeatedly called for an increase in coupled payment allowance, while DEFRA secretary of state Owen Paterson has said he would like them discontinued.