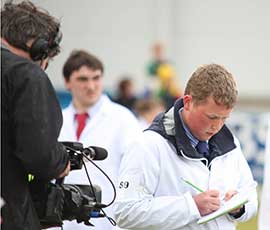 Three young farmers will feature on BBC Two Scotland tonight as part of an hour-long documentary.

The programme, entitled Tractors and Trophies, will showcase the work of the Scottish Association of Young Farmers Clubs (SAYFC) as their members compete in stock judging and tug of war at the Royal Highland Show, as well as light-hearted competitions such as pillow fighting and best decorated toilet.

The documentary was filmed earlier this year to mark the SAYFC’s 75th anniversary and stars three of its members: national chairperson Katherine Marr, 26, a chicken farmer from Tain, John Howie, 24, who runs his family’s 146ha farm near Dundonald, Ayrshire, and Steph Dick, 19, who is in line to take on her family’s 1214ha farm, near Cowie, Stirlingshire.

“Tractors and Trophies offers a unique insight into the SAYFC past and present. It also showcases the importance of SAYFC as often the only social outlet in Scotland’s rural communities, providing an essential lifeline in an isolated profession. It’s the glue that binds the farming community together,” said SAYFC chief executive Penny Montgomerie.

The programme is described on the BBC Scotland website as “a mixture of competition, dating agency, and rural university.”

Tractors and Trophies will be broadcast tonight (7 November) from 9-10pm on BBC Two Scotland.