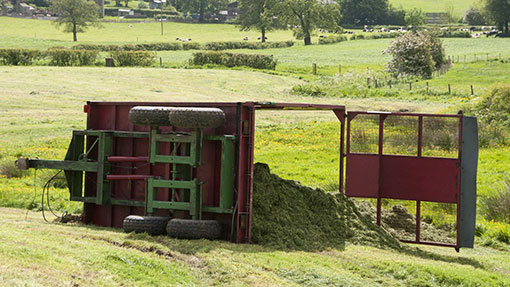 The NFU Mutual saw a big increase in large injury claims in 2013, leading chief executive Lindsay Sinclair to warn that the number of serious accidents on farms was getting worse.

While the incidents or events leading to these large claims were not exclusively on farms or concerning farming businesses, agriculture represents the bulk of the group’s insurance business. The figures include fatalities but these were relatively few and tended not to be the highest sums paid out.

Many of the large claims involved a fall from height, resulting in extensive bodily injury and a requirement for life-long care, said chief executive Lindsay Sinclair.

More on health and safety and accidents

“Whilst farming accounts for 1.5% of the UK’s workforce, it is responsible for 15-20% of all workplace fatalities. This has to change. The impact on individual lives is enormous,” said Mr Sinclair.

More on the NFU Mutual claims

A rehabilitation programme run by the NFU Mutual helped 554 people back to work, or to regain mobility or maximise their independence.

* Profits from both insurance and asset management grew at NFU Mutual in 2013.

Profit after tax almost doubled to £635m compared with £330m in 2012, with £120m of this coming from insurance underwriting.

However it was the growth of assets under management which contributed most to the profit rise.