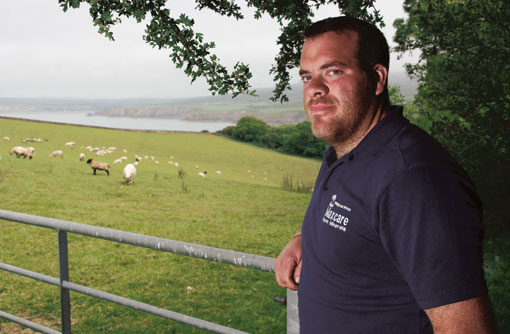 An additional 100 ewe lambs have swelled the flock in the run-up to lambing at Dinas Island Farm.

Neil and Roger Perkins are moving towards all Lleyns and to speed up the achievement of this within two years they have retained 450 ewe lamb replacements instead of the usual 350.

“We need to build up the Lleyn numbers and as we’d had a fairly good lambing last year we decided to keep more on,” says Neil. “They have slipped well into the system although it will mean more work at lambing.”

The Perkins started with a nucleus of 300 performance-recorded Lleyn ewe lambs and yearlings in 2007 and now have just over 1,000. The remaining 600 in the flock are crossbreds and the plan is to breed these out of the system in two years’ time.

The final batch of lambs is usually sold in December each year but to accommodate the additional 100 ewe lambs in the system meant selling everything by the beginning of November this time. This last batch was sold to a local store lamb dealer and averaged £62 a head, around £2/kg.

Selling all the lambs before Christmas marks the end of the season. “We like to put a close on the sheep system so that we can gear up for lambing on 1 March, we don’t like to muddle up two years,” says Neil.

The heaviest 400 ewe lambs – everything heavier than 37kg – were put with the tup while the remaining 50 were turned onto the cliff land for winter grazing. Four new rams were used this year and Neil has been very pleased with their performance.

“The tups came out of the ewes pleasingly well, the best rams served up to 125 ewes and only dropped one condition score,” he says.

To remove the complication of establishing bloodlines, the Perkins have decided to buy all their tups from a single breeder, Marcus Bullock. He farms in Worcester and has more than six Lleyn family lines. They plan to buy tups from one of the bloodlines every year.

“This year all the yearling ewes have been served by the first blood line,” Neil explains. “Marcus does such a great job of recording that we can select what traits we want in a given year, for instance one year we might need to select on size. We can pick up the ram we need from the data, regardless of the look.”

This new breeding policy will free up some of Neil’s management time. “It will mean I can concentrate on monitoring and selecting the females that suit the flock best. For the majority of the year it is just me and my father here so by taking ram selection away we will have more time to capture data from the females.”

Data logging and record keeping is an intricate part of the sheep system, but even so, Neil was still apprehensive of a recent sheep tag inspection. He reckons the inspection may have been triggered by the higher than normal number of livestock movements in 2011. “Thankfully there were no problems and all the counts added up.”

The inspection came three days after he received his Single Farm Payment. “We were pleased the inspection wasn’t three days earlier because the payment would have been put on hold.”

This is the first time in three years that the entire payment was on 1 December and Neil was delighted to get the payment so promptly. “It comes at a time of the year when we have stopped selling and when we have our maximum outgoings on vaccines, boluses and feed. The payment helps carry the flock until we can start selling lambs again.”

With summer grass having been in short supply on the farm due to lack of rainfall, every opportunity was seized to take on tack grazing. “Even if it was a paddock for just 30 lambs for five weeks we took it on because it meant we had 30 less on the farm. We normally only take winter tack but last summer was an exceptional one,” says Neil.

Thanks to an autumn flush of grass, the farm fully recovered which allowed the flock to be grazed for two weeks longer than usual with sheep being housed at the end of December. In the final rotation the grass was grazed to 4cm by running the flock in each field for five days. “We managed it so that we could have Christmas Day without feeding and housed the flock between Christmas and New Year, eight weeks before lambing,” says Neil.

“Their nutritional requirements are then met by feeding the quantity of concentrates needed to match the number of lambs the ewes are carrying.”

It will be the second successive year he has lambed indoors after lambing outdoors for three years. Neil says the flock is in good shape for lambing. “We had such a good spring that the ewes didn’t have to milk off their backs. The autumn flush has carried them through nicely.”

Last year there was an issue with inconsistent lamb sizes and there were some abortions. Blood tests failed to pinpoint an abortion problem. It had been suggested to Neil that the red clover silage may have been a factor so in an attempt to get to the root cause Neil has only vaccinated a random selection of 400 ewes with an anti-abortion vaccine. It was a supply shortage of vaccine that prompted this trial. “We could only get 400 doses so we saw it as an opportunity to run a trial. Through our system of recording we know which ewes have had the vaccine and we will monitor these,” he explains.

“If we get a similar problem with small lambs this year we will be able to establish which sheep they have come from. If they come from the vaccinated ewes we will know that the issue is diet. The vaccine cost us £3 a head so if we had dosed the entire flock it would have been a costly exercise if it was not the cause of the problem.”

To prepare for the start of lambing on 1 March, Neil and Roger have been dismantling the sorting system in the lambing shed. Although lambing is demanding, they see it as an exciting time. “The six weeks of lambing dictates how we are going to do for the rest of the year, so much hangs on the lambing percentage,” says Neil.

This year he is hoping to get lambing help from students at Gelli Aur College in Carmarthenshire. Last year he thought he would be able to manage the night shift on his own but sleep deprivation took its toll.

“I’m also in charge of data logging and when you have had little sleep things go wrong,” he admits. “Staff pay for themselves through the lambs saved, I’ve worked out that we only need to save one lamb a day to pay for this extra help.”

This year he will be camping in his new office next to the lambing shed for the six weeks of lambing. The office is equipped with a bed, desk and kitchen.

The 98 autumn-born heifers Neil is rearing on contract for a dairy farmer have been weaned and are being wintered in sheds on the farm. The first of the spring-born calves will arrive in February.

reparing the fields for spring turnout has started with an order for phased-release ammonium sulphate at £390/tonne. This means that if the soil temperature is not high enough when the material is spread in March, the ground will hold it until the weather warms up.

“This type of fertiliser suits us because we don’t want oversupply. We want steady growth and like to avoid spikes in growth and protein,” says Neil. It is used on the whole farm, except for the Italian ryegrass, which have ammonium nitrate.

Over the next few weeks Neil and Roger will be coppicing and double fencing 400m of overgrown hedges as part of their Tir Gofal land management agreement. In the last 12 years, through Environmentally Sensitive Area and Tir Gofal agreements, approximately 2,500m of hedging and fencing have been established. The 400m they are currently working on represents one of the last hedges that will need doing.

Have you had a problem with small lambs and/or abortions which could be diet related? Have your say or offer advice on our forums at www.fwi.co.uk/lambingproblems