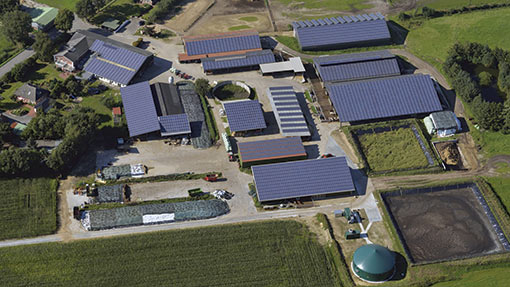 Those with power to export from farm energy projects need to shop around – a better deal than the Feed-in Tariffs (FiTs) can often be found, say advisers.

“Power companies that operate green electricity tariffs have to meet their commitments and there is more demand than supply of late – that’s the driver behind the better offers,” says Strutt & Parker partner Alexander Creed.

See also: Loans of up to £400,000 available for on-farm anaerobic digestion

“For one farm where we have just helped install solar PV across eight buildings, in a large (700kW) project, we have secured a price of 6.7p/kWh exported against the standard FiTs export rate of 4.6p/kWh.

“For farms with more standard size projects of 100-200kW, we are now regularly securing around 5.5p/kWh.

“For solar PV in particular this makes the case to do something larger than the usual 50kW system and makes investment in grid upgrades compelling as returns are increasing.”

There is a sensible case developing that every rooftop on farm should have solar PV and the farm become a mini power station, says Mr Creed. This includes expansion for those with existing installations although grid upgrades may be needed to cope with the extra output.

However those negotiating power purchase agreements (PPAs) need to be clear about what they are committing to, says Mr Creed. The starting point is good data on how much power is used on site, so that the likely amount available to sell on can be calculated with some certainty.

Many farms now have half-hour metering systems which make this easier to do. The key is not to guarantee to provide a certain amount at a set time,” says Mr Creed, because there will be penalties for failing to meet such commitments.

PPAs can run for anything from 12 months to 10 years but are typically for two to three years. Many people believe that they must offer their spare power to their own electricity provider but this is not the case and their own provider may well not be offering the best rate, says Mr Creed.