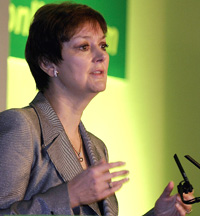 British farmers could capitalise on the fact that shoppers are becoming increasingly concerned about animal welfare when buying food, according to the food and grocery think-tank  IGD.

One fifth of shoppers (20%) now say that knowing about the standards of animal welfare has become one of their key drivers of product choice, which is up from 13% in 2008, according to the survey Shopper Trends 2009.

When asked about concerns they have relating to food production, almost half (46%) of respondents mentioned animal living conditions compared with 38% in 2008.

“As one would expect in the current economic climate, price remains a key driver for shoppers,” said IGD chief executive Joanne Denney-Finch

“However, the stronger focus on standards of animal welfare demonstrates that consumers continue to grow more engaged with their food. People are making well-informed decisions on their food choices and looking for value for money without compromising on their values.

The survey comes in the same week that the RSPCA highlighted a lack of consistency in the labelling of pork products.

It claims only 2% of consumers understand terms such as free-range, outdoor bred and outdoor reared, so a legal set of definitions should be introduced.