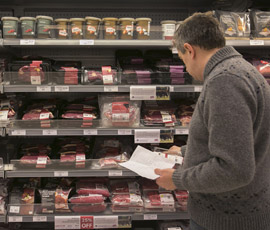 Animal welfare campaigners are stepping up calls for special food labels that tell shoppers how meat is produced.

Campaigners commissioned a survey showing that eight out of 10 consumers want to know what farming system was used to produce meat and dairy items.

The survey found some 83% of shoppers want labels clearly identifying the production system used on meat and dairy products and 79% of respondents said farm animal welfare was important when deciding which food products to buy.

The research was commissioned by Labelling Matters, a joint initiative by Compassion in World Farming, the RSPCA, Soil Association and the World Society for the Protection of Animals.

It found that animal welfare was an important factor when choosing food, with “strong demand” from UK shoppers for mandatory “method of production” labelling.

“Method of production labelling is not about telling people what to buy – it’s about giving them a straightforward choice.”
Helen Browning, Soil Association chief executive

Soil Association chief executive Helen Browning said clear labelling was crucial if Brussels was to make good on its ambition for the market to drive improvements in farm animal welfare.

“Method of production labelling is not about telling people what to buy – it’s about giving them a straightforward choice,” she said.

The best products were often already labelled. But until the rest were too, consumers were left to hope or assume that everything else on the shelf was produced just as humanely.

Making it clear that about 90% of chickens and pigs reared for meat in the EU were housed in intensive systems would be fairer for consumers – as well as for farmers working to higher welfare standards.

RSPCA head of farm animals Julia Wrathall said consumers were still kept in the dark about the farm systems used to produce the vast majority of meat and dairy products.

“It can be extremely difficult for consumers trying to buy higher welfare products,” she said.

“So many meat and dairy labels use misleading language and images to suggest good welfare even when the animals have been reared in standard intensive systems.”

Method of production labelling has been legally required for eggs sold in the EU since 2004. But similar rules are not in place for meat.

On poultry meat, for example, the Labelling Matters campaign is calling for labels to include phrases such as intensive indoor, extensive indoor, free range or organic.