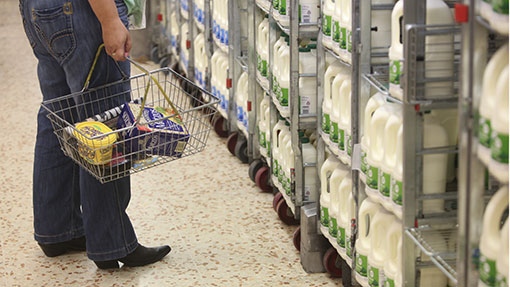 The vast majority of the British public would be willing to pay more for milk to help struggling dairy farmers, research shows.

According to an AHDB/DairyCo survey, carried out by YouGov, 85% of the public would pay more for milk.

Consumers were told that an average four-pint (2.27-litre) bottle of milk costs £1.13. With this in mind, they were asked if they were willing to pay anything extra for the dairy farmer.

The online survey of 2,085 British consumers found that 85% would pay more for their milk if it meant dairy farmers got a fair price.

Of those who would pay more for a standard four-pint carton of milk, 24% would pay 6p to 10p and 14% would even stretch to paying more than 20p extra.

Consumers also showed they had a solid understanding of the current cost of milk.

They were asked how much they thought a standard four-pint carton of milk cost. And 52% rightly answered that it cost between £1 and £1.19 on average.

But when asked how difficult it would be for their household to go without milk for a week, 37% answered “very difficult” and 31% “fairly difficult”.

The survey also showed that consumers had a high regard for British dairy farmers.

Some 49% of respondents agreed that British farmers were “doing a good job” and 39% agreed that dairy cow welfare in the UK was “amongst the highest in the world”.

A spokesman for industry body DairyCo said: “British dairy farmers have great support from the public, as demonstrated by our research. In particular, their views of our welfare standards are very positive and have been consistently so over recent years.

“The majority of those surveyed do accurately estimate the price of milk and the vast majority indicate a willingness to support dairy farmers through the price they receive.

“We do, though, want to be mindful of our reputation to supply delicious, nutritious products of good quality to the public and wouldn’t want to do anything to undermine their confidence in the supply of our product.”

Commenting on the survey, NFU president Meurig Raymond said he wasn’t surprised by the results.

He added: “Whenever the NFU has done a survey of consumers, we have found they are strongly behind British farmers and British produce.

“They are likely to source British produce by looking for products that carry the Red Tractor logo.

“We are picking up that consumers are very supportive of British farming. There is recognition that dairy farmers are struggling with falling prices.”

* YouGov conducted the online survey of 2,085 adults between 1-2 October, on behalf of AHDB/DairyCo.