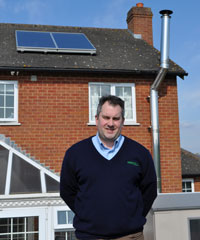 Renewable energy offers a profitable diversification opportunity for many farm businesses, but for one Herefordshire farm it has become the focus.

There are four types of renewable energy system in action at Humber Court Farm near Leominster in Herefordshire.

The 80ha (200-acre) beef and arable family farm first got into renewables more than five years ago with the installation of a wood pellet boiler to heat the 1990s-built five-bed farmhouse. Since then, they have gone on to install solar thermal panels for the house’s hot water, solar PV for electricity generation and most recently a combination biomass boiler for hot water and central heating in converted farm offices.

The investments have all been financially worthwhile, but there have been plenty of lessons learned, says Richard Collins, who runs the farm with his parents and also works full-time as group biomass manager for Countrywide Farmers.

“We fitted the original wood pellet boiler to replace an old oil-fired one about five-and-a-half years ago. Even with heating oil at 30p/litre, we saved around £800-1000 on fuel bills in our first year and, with oil at nearer 50p/litre, I reckon we’ll be saving £1500-2000 a year,” he says.

The 30kW Danish-built system uses 5-6t a year of bought-in wood pellets (see table) and heats all of the house’s central heating and hot water.

“It’s a fairly old system now, but works well and is pretty low maintenance,” he says. “A certain amount of interaction is required because biomass boilers burn solid fuel. Pellets come in 10kg bags and we have to fill the 200kg hopper once a week or fortnight, plus clean the burning grate weekly and get the chimney cleaned every year.

“If I started again, I probably wouldn’t put it in the utility room of the house – while they are generally very clean, there is some dust and they also take up a fair bit of space.”

More modern combination boilers, such as the one recently installed in the farm offices, can be cheaper to install and also don’t require hot water tanks, he says. “A lot of people may be able to reduce costs with that type of boiler. But combi boilers aren’t for everyone, especially if there’s a big hot water need, in which case you’ll probably need a buffer hot tank.”

His 20kW Swedish system, installed last year to heat the farm office and meeting room, will use about 3t of pellets a year. It is MCS-accredited, so will qualify for the Renewable Heat Incentive, which should lead to a 12% return on investment, Mr Collins says. Maintenance requirements are similar to the older house boiler, although the electronic control system is more user-friendly.

“We regularly come across farmers wanting a woodchip or log-fuelled boiler because they’ve got their own supply of wood. You need to remember there is a huge workload required for felling, chopping and carting logs and you’ll need a fairly big tonnage each year. In certain cases, where there’s a ready supply of wood and spare labour, it may be worth doing, but you’ve got to understand the work required.”

Woodchip or log-fired boilers are generally more expensive than pellet boilers, especially for smaller systems, he adds. “The fuel delivery system has to be more robust for woodchip systems because there can be huge variance in the size of chips or logs and their moisture, whereas pellets are pretty uniform. We tend not to look at woodchip boilers until you get above 70-80kW demand due to the relative high capital cost of smaller systems.”

Humber Court Farm is home to two types of solar system. The solar thermal panels on the house roof were installed three years ago and provide most of the house’s hot water (tap and central heating) from mid-March to early October, weather permitting.

The two Solfex flat-plate collector panels cover 4.2m2 and generate 1200-1500kWh/year. With the control system, installation cost £3500-4000 and payback is around 15 years, Mr Collins says. “Payback isn’t as good as the pellet boiler as it’s too old to qualify for the RHI, but we’re happy with how the panels have worked.”

Having got on well with solar thermal, Mr Collins recently installed a separate solar photovoltaics system on one of the fibre cement barn roofs. The 3.6kWp system sits on a southwest-facing roof at a 17-18-degree pitch. It cost £14,000-17,000 to install and should provide 30-35% of the farm’s electricity needs. With the 41.3p/kWh index-linked Feed-in Tariff payment, payback will be around 10 years.

“We’re saving 10p/kW on any electric we use ourselves, plus the FiT payment, which will go up to 43.3p/kW this year. We’re on three-phase electric and connected to the grid, but don’t have an export meter, so are only paid 3.1p/kW on electric exported.”

Mr Collins says installation and operation were straightforward. “The most frustrating time was when snow sat on the roof for two weeks and we couldn’t reach to clear it. Our biggest regret is we should have put a bigger system up – we could go up to 10kW on this roof, but it came down to the capital available at the time.” 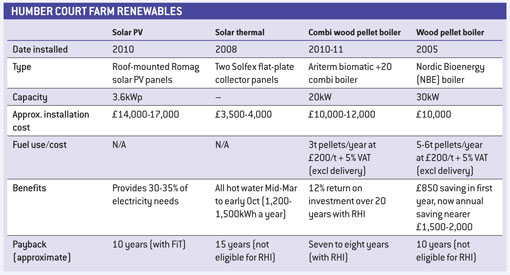