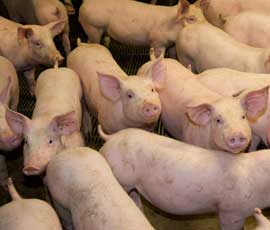 A combination of indifferent retail demand not helped by the recent wet weather and the falling value of the euro has to put a lid on the early summer price rise normally seen at this time of year, writes Farmers Weekly commentator Peter Crichton.

The Deadweight Adjusted Pig Price did rise to 148.21p/kg in the week ended 11 May, but weekly prices from the main companies were held.

Some sellers had hoped for a “Pig Fair Penny”, but this was not to be as far as shout prices were concerned, with Tulip electing to stand on and all of the other major players following suit, so the league table remained unaltered as follows:

Spot bacon was generally traded at around the 148-150p/kg mark according to specification. But on a more positive note, no pigs have been rolled this week and everything has found a home, albeit at a price that many producers feel is out of line with their production costs.

More eurozone turmoil has meant a weaker euro, which traded on Friday (11 May) worth 80.4p compared with 81.19p a week ago.

Most cull sow abattoirs were paying in the 118-122p/kg region on a delivered basis, but were keeping a wary eye on the German market where some of their larger customers had cut back on orders and prices.

The weaner market is also continuing to suffer from high feed prices as well as a significant lack of finishing places, with the result that the latest Agricultural and Horticultural Development Board 30kg ex-farm average weaner price has slipped again and now stands at £45.24 a head and finishing space is reported to be very hard to find.