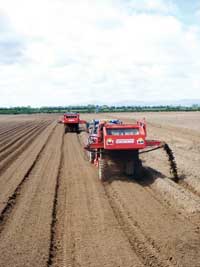 Interest in old crop potatoes is firming through most of Europe because of slow development of new crop, according to the Potato Council.

However, the GB average ex farm potato price fell slightly in that week, to average £177/t.

Meanwhile, UK potato exports have continued at a strong pace. In the period from July 2010 to March 2011 they rose by 71% to almost 200,000t. The main customers were in Northern Ireland, Spain, the Netherlands and Poland.

Over the same period imports of fresh potatoes into GB fell slightly, while total processed products imports were down by 16%.