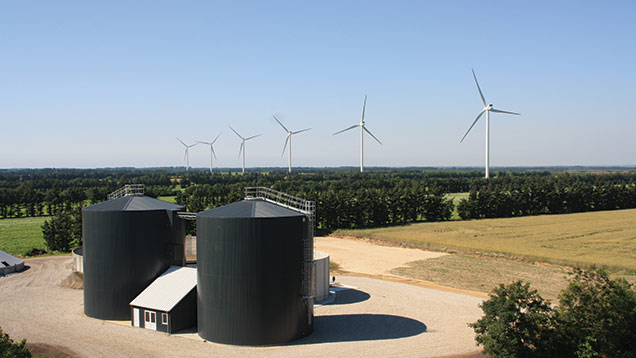 The technology can provide a safe route for slurry and waste disposal, as well as generating energy and income earning potential, while the digestate by-product  provides a fertiliser.

The small-scale AD sector is generally defined as plants of 500kW and smaller. Like the larger installations, the main challenges are finance and grid connection. Economies of scale also play a part, as generally the larger the plant, the lower the total cost of installation a kW.

One such advantage is that smaller plants may go through the planning process under farming’s permitted development rules (PDR) – a shorter and cheaper alternative to the full planning approvals process.

The whole process – depending of the size of the system – from planning to installation should take between six and 10 months, he says.

Planning can take just a few weeks under the PDR system, or three to four months for full planning. From achieving permission,  plants of this scale take four to five months to build and then 35 to 40 days to bring to full capacity.

Mr Jacobsen says that while those considering a small AD installation should take account of the important planning, finance and grid issues, it is also crucial to understand and evaluate the different types of AD technology correctly:

Most pig farms are AD candidates as they have expanded into larger units to gain core efficiencies,” says Mr Jacobsen.

“Dairy farms generally need to be a minimum 200 to 300 cows.  However, it depends on what other waste feedstock streams can be accessed or whether energy crops are grown. A co-operative approach, joining with other farmers, can also be beneficial.

“An AD system is aimed at producing max-rated power (for example 250kW) for 8,000 hours/year. Most power will be exported but a farm needing less power an hour than the rated power will effectively be self-sufficient. However, even if the AD system does not offset all of the needed power, it will offer an alternative income stream.”

“Because it’s an enclosed unit, it eliminates odour and therefore there are no restrictions on where it has to be placed. Most farms with open lagoons will be forced to cover them up through new regulations and this can be negated through an AD plant.”

Hallmark Power’s AD plants include 100kW, 250kW and 500kW models, with overall costs from £600,000 to £1.6m, plus grid costs. These are supplied by Danish company CombiGaS, which was itself founded by a pig farmer.

While these can operate at larger scales, the three sizes are designed to be self-sufficient on larger pig and dairy farms, fed exclusively by the slurry and other waste produced. The more consistent the feedstock, the better, says Mr Jacobsen.

These units are supported by Danish government export credit finance, making finance more easily available to UK farmers than for some other AD units, says Mr Jacobsen.  “As long as the farmers can demonstrate two to three years of healthy accounts, they will be considered for this finance,” says Mr Jacobsen. This currrently offers 85% loans at 3.5% over five to seven years. The loans are secured not by the farmer, but by the Danish Government.

How does AD work?

AD converts plant and animal material (feedstock) into useful products through the action of micro-organisms in the absence of oxygen. Biomass can include a mixture of slurry, animal feed and energy crops. These are put in sealed tanks where the micro-organisms digest them, releasing methane (biogas) that can be used to provide renewable energy.

Primary elements of an installation are an in-feed system, primary and/or secondary digester tanks, gas storage (often built into the tanks), a combined heat and power (CHP) unit and a control building.