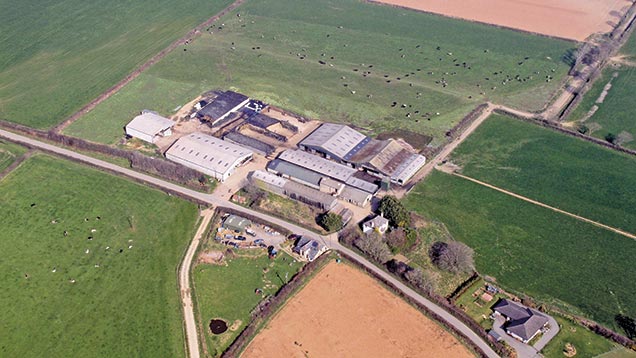 Buyers have the choice of some smaller farms this week in Cornwall and Wales.

A 115-acre dairy unit in Cornwall is about to come to the market with a guide price of £1.5m.

Buttern Farm, Boyton (pictured right), sits north-west of Launceston and the Grade 3 land is on loam to silty-loam soils.

The farm is currently down to grass and became vacant following the end of a tenancy in spring this year. Since then store cattle have been kept on the farm.

There is a three-bedroom house and a two-bedroom chalet, while the extensive dairy buildings include 230 cubicles, calf housing, loose housing and several general purpose buildings.

Selling agent Will Chanter of Savills described this as “a cracking dairy or livestock farm, with decent natural and borehole water supply”. He said it could produce grass all year round, even in a dry summer.

The farm was equally suited to arable production, and there was also plenty of bare land and grass keep available in the area if the buyer wanted to take on additional land.

While the 16:16 direct line parlour was in need of some attention, a buyer could milk straightaway, said Mr Chanter.

The land lies all in one block, is mainly level and includes four acres of woodland. The sporting rights will be retained by the seller but Basic Payment Scheme entitlements will be transferred to the buyer. (Savills 01392 455 755)

A mid-Wales hill farm of 189 acres with commons grazing rights will also be launched shortly.

Unusually, Glangwesyn Farm at Abergwesyn, in Powys, has an 11-bedroom farmhouse (pictured below), recently refurbished, so has potential for alternative income.

The farm is 280-410m above sea level and is being sold to consolidate land holdings and buy land adjacent to another farm on which the seller is now based.

Glangwesyn Farm was priced to sell, said Mr Powell, with a guide price of £1.25m.

As well as several traditional farm buildings with potential for other uses, there is a converted, detached stone studio office, oak woodland, shelterbelt plantations and 21 acres of mature larch.