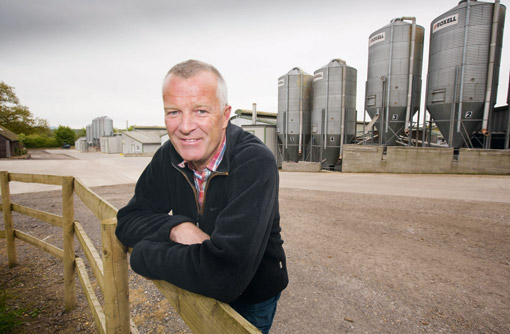 The same money for less work is how broiler producer Nigel Bell views his renewable energy enterprises at Savage Cat Farm in Dorset.

Mr Bell, who grows 200,000 standard birds in four sheds with his business partner Lester James for Faccenda, first got into renewables with solar PV about four years ago.

“Initially we were looking at AD, as we have a dairy farm next door and thought we could pool resources,” he says. “But the logistics were horrendous and then Feed-in Tariffs came in and the economics of solar suddenly looked more attractive.”

Mr Bell says the initial plan was to cover all four sheds with solar panels generating 500kWp. But that would have meant spending another £70,000 on improving the grid connection while receiving a lower FiT on the energy produced above 250kWp.

So the decision was taken to stick at two sheds and 250kWp, with 600 SunTech and Trina polycrystalline, ammonia-resistant panels put on each, and SMA inverters installed to convert from DC to AC.

“Solar PV and poultry farming are a natural fit,” says Mr Bell. “Broiler production is one of the few industries where energy demand increases the more the sun shines. Poultry farms also tend to have a three-phase power supply and steel trapezoidal roofs, which are easy to fix panels to.”

Most of then installation work at Savage Cat Farm was done by Mr Bell’s building company. “We were swamped with solar companies coming here trying to sell us a deal. One day we had three BMWs turn up with men in suits and we thought, ‘hey, there is money in this, so let’s do it ourselves’.”

This self-build approach paid dividends when the second shed was being kitted out in early 2011 just before the government cut FiTs. “We had everything we needed except the aluminium fixings and these were held up in Germany with just one week to go. So Lester drove 1,600 miles over the weekend to pick them up. Then we completed the job and had it registered just in time.”

This secured a FiT of 32.7p/kWh, index linked for 25 years. Combined with the 4.5p/kWh earned on the 25% of the output that is exported to the national grid and the 10p/kWh saving on the electricity they would otherwise have bought, total earnings come to about £95,500 a year.

This is all from a capital outlay of £450,000, representing a 21% return on capital, before borrowing costs. “The only work we have to do is a day’s cleaning of the panels after every crop, as the pitch of our roofs is not steep enough for the rain to do it for us.”

Despite the subsequent cuts in FiTs, Mr Bell believes the sums for solar PV still stack up, as the cost of panels has fallen dramatically and poultry farmers are using most of the electricity themselves. “Today the FiT would be 11p/kWh and the income from 250kWp £45,383. But the capital cost would be just £225,000 and the return on capital 20%.

“My advice to anyone thinking about solar PV – and renewables in general – would be to get on with it sooner rather than later, before the government moves the goalposts again,” says Mr Bell, whose company Commercial Biomass Partnership provides advice and installation services for other farmers.

It’s not just solar PV that generates an income at Savage Cat Farm. The partners were early investors in biomass boilers, backed by participation in the Renewable Heat Incentive programme.

The initial plan was to install one 800kW boiler for the whole unit, with a district heating system to distribute the hot water to two heaters in each shed. But the cost of such a system, estimated at £100,000, was prohibitive.

So the decision was made to install four smaller 199kW ETA HACK biomass boilers from Austria – one in each shed.

This was before the RHI scheme came in – but it turns out to have been a fortuitous choice and each machine gets the maximum RHI payment of 8.6p/kW up to the 200kW threshold, compared with just 5.1p/kW had the single larger machine been used. This is guaranteed for 20 years.

Wood is bought in bulk – an 800t pile of logs sits to one side of the farm entrance – and a contract chipper is employed to produce 200t of G50 grade woodchips in one day. That is enough for about five months’ use.

The woodchip is stored in a hopper and fed into each burner via an auger and ignited. A government-approved meter measures the temperature of the water going out, the temperature coming back and the volume to calculate the energy produced, used to determine the RHI payment.

Against a capital outlay of £400,000, Mr Bell puts the return on capital at 34%. Even without the RHI payment, he reckons the system would pay for itself in 10 years. With the RHI, the payback time is just three years.

But it’s not just about money. Like other producers who have switched from direct oil heating to biomass boilers, Mr Bell reports a considerable environmental improvement for the birds, with CO2 levels dropping from 3,000ppm to less than 1,000ppm.

The litter is also much drier and the lower emissions mean the sheds can be shut tight in the first days of brooding as there are no noxious gasses of excess humidity to vent away.