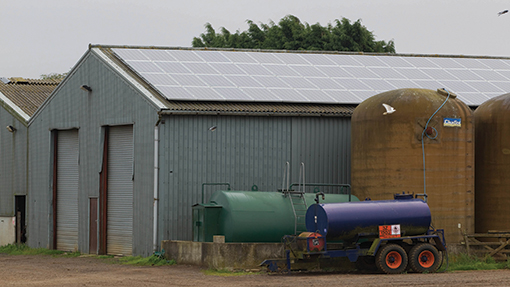 A series of government announcements last week (2 October) have signalled a definite shift in support away from large-scale solar farms towards smaller mid-scale roof-mounted schemes.

The Department of Energy and Climate Change (DECC) confirmed it would go ahead with controversial plans to end existing Renewables Obligation (RO) support for large 5MW+ solar projects from next April and replace it with a competitive auction-based system.

The decision could limit future solar farm opportunities for landowners, but there was slightly better news for those considering roof-mounted schemes, as DECC also proposed to separate out Feed-in Tariff (FiT) degression bands for rooftop solar projects larger than 50kW from April 2015.

For farmers it is quite encouraging, although it does depend what scale solar array you are considering, said Thomas Ireland of Carter Jonas.

It is good news for those putting in their own smaller rooftop solar as rates should degress less, but the changes could discourage some of the larger developer-led schemes.

Existing FiT definitions of stand-alone and other-than-stand-alone systems will be used for solar projects under 250kW, but above that DECC also plans to change how these categories are defined to prevent developers creating building structures to meet the non-stand-alone definition.

DECC proposes that from 1 July 2015 developers of schemes larger than 250kW will have to show that a specified proportion (10%) of the electricity generated can be used in the building(s) to which panels are wired.

A consultation on this has been launched and closes on 24 October.

Mr Ireland said that while rooftop solar could yield very good returns, the main driver for any future investment should be the potential energy savings, rather than how much FiT support would be paid.

The FiT rate is so low that smaller systems predominantly exporting electricity to the grid for 5-6p/kWh will struggle to be viable. But if you can offset a large proportion of electricity use on-farm and save 12-14p/kWh instead, there are good returns to be had.

A 50kW solar array on a 200-cow dairy unit, for example, should still give a 10-year payback with a 50:50 split between on-site use and selling to the grid, he notes. Investing in technology that allows ice banks or other equipment to kick-in automatically when panels run at full capacity could help maximise returns, he adds.

Meanwhile, DECCs decision to end the RO for solar arrays over 5MW came despite strong opposition from the solar industry to the consultation launched in May.

The government has decided to replace the RO support for larger schemes with the Contracts for Difference (CfD) system, where support contracts are effectively auctioned to renewable energy developers.

There will be a grace period for schemes that had made a significant financial commitment before the consultation was launched on 13 May. There could also be some leeway for developers that miss the 31 March 2015 cut-off for claiming the RO, due to grid connection delays. DECC has launched another consultation on how this grid delay grace period, which closes on 24 October, will work.

Solar Trade Association chief executive Paul Barwell said ending the RO was a serious strategic mistake that could prematurely curtail the growth of the sector. Solar had only used around 1% of the RO budget, and ending support would effectively cap solar deployment at 4GW by 2020.

Pulling the rug on technology that the International Energy Agency says could be the biggest global power source by 2050 is crazy, he said.

The STA has launched a petition calling on the government to rethink its attitude towards solar.

Merlin Hyman, chief executive of Regen SW, said DECCs decision to try and soften the blow with an increase to the overall budget available to large-scale projects was welcome, but there was still not enough funding for all projects currently coming through the planning system.

Developers will have to carefully consider whether sufficient subsidy will be available when bringing forward projects, he said.

If solar deployment is to be moved from fields to commercial roofs, it will need much work to address the barriers.

Available grid capacity remains one of the biggest barriers to deployment in many areas and could be a bigger disincentive to future deployment than the replacement of RO support with CfDs, added Mr Ireland.