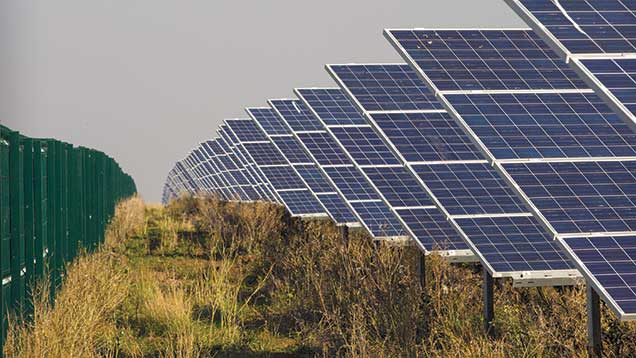 Rents have fallen slightly since their peak a couple of years ago, but rates of more than £1,000/acre are still being reported in southern England. Further north, £600-£800/acre is more typical, with rates of up to £1,000/acre, depending on the level of revenue share included.

In Scotland there is also still strong interest from developers offering rents from £400 up to £1,000/acre, says Richard Higgins from CKD Galbraith. “There’s a lot of activity, but the number of bigger solar schemes actually being developed is still fairly few and far between.”

A rush by developers to secure sites ahead of the new Contracts for Difference (CfD) support regime coming in this April has kept the immediate market buoyant, but there is less certainty further ahead, says Strutt & Parker’s Henry White.

The replacement of the Renewables Obligation scheme with auction-based CfDs for solar sites larger than 5MW means developers have to bid for support, with no guarantee of success.

Only two 2015-16 5MW+ solar schemes secured government support in the first CfD auction last month, and in both cases the support awarded [£50/MWh] was only just above the wholesale electricity price.

The solar farms awarded a CfD contract for 2016-17 achieved a better rate (£79/MWh), which shows some potential for the right site, says Mr White. “Feedback from developers suggests that with a tariff at about £80/MWh, the bigger, cost-efficient sites can proceed.

“I anticipate an effort by developers to force rents down in the CfD regime, however we are seeing no evidence of that for the CfD sites we are currently progressing that will go into future auctions.”

The biggest issue for developers and landowners considering any renewable energy project continues to be the available grid capacity, says Hugh Taylor of consultant Roadnight Taylor.

“The grid is now so full that even proximity to the larger electrical circuits is unlikely to enable a connection. This imbalance between the supply of viable sites and the demand for them has created a ferocious market for grid-permissioned sites.

“Ground rents are still surprisingly strong; perhaps not quite what we were seeing twelve months ago and typically for only up to about 25 acres, but still delivering a multiple over traditional farming enterprises.”

Victoria Lancaster, renewable energy adviser at H&H Land and Property, says it is a seller’s market for sites that have grid capacity available as developers are desperate for suitable sites.

She also says the uncertainty about future government support is prompting some developers to look at very large (80-100-acre, or about 20MW capacity), so-called merchant plant solar farms that are built free from subsidy.

One estate in Lincolnshire has just signed up to such a project on a 149-acre disused airfield site. “Developers may look to sign people up now and pay a retainer for the site until construction begins. But be very careful who you sign up with and don’t just go with the first company that approaches you.”

Some developers are also looking to secure longer rental terms of up to 36 years instead of 26 years, says George Paton of Webb Paton, who notes that solar installation costs have fallen from about £2m/1MW of solar four years ago to nearer £650,000.

While this has helped maintain demand as subsidies have fallen, he believes appetite for new sites may diminish under the CfD system. “We may not be many years away from the solar bubble bursting. The next diversification in renewables will be more gas-to-grid schemes or renting land for biodigesters.”