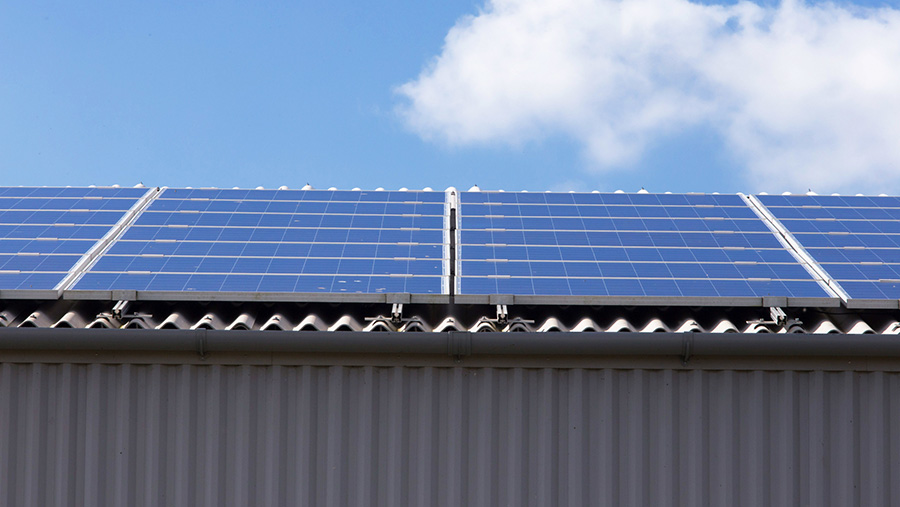 Farm rooftop solar installations could be hit by a six-to-eight-fold hike in business rates from next April if government plans go ahead.

Most at risk are projects where the installation is primarily to provide power consumed on site.

Renewable energy interests are lobbying to get this reduced, although some farm schemes may be eligible for an exemption as they are on agricultural buildings, which are not subject to business rates, said Nick Wood of the Solar Trade Association (STA).

See also: Farm power – how to get a fair deal for green grid connection

The change is proposed as part of a revaluation of business rates which takes place every five to seven years.

It will affect all renewable technologies, although the picture is mixed for ground-mounted solar, with the prospect there will be increases and decreases in business rates for this sector.

The NFU and STA are calling for clarity on the way the hefty increases for rooftop schemes have been calculated.

The issue is that the rateable values that will come into force for rooftop solar as of next year bear little relation to the revenue generated by the installations but are instead based on fixed assumptions about capital costs of installation, said the STA.

So-called microgeneration schemes – those smaller than 50KW – are exempt from business rates.

“This is a huge increase in the running costs of a rooftop solar installation that will affect both existing and new projects,” said Paul Barwell, chief executive officer of the STA.

“In some cases, it would actually send installations into negative returns: you would be spending more on the system in tax and maintenance than you would be getting back from the sale of the power and the feed-in tariffs support.

“We therefore need ministers to step in as soon as possible. The system needs to recognise that solar is a unique technology with both costs and revenues having come down over the past five years.

“This has created a complete poor fit with the business rates system that needs to be fixed, or else we will face a prohibitive tax hike in this sector.”

The plans do not affect domestic solar homes – only businesses that have solar on their roof, where they themselves own the system and installed it with a view to using most of the electricity themselves.

Public authorities, schools and community buildings that have solar on their roofs are also at risk of being affected by this tax rise, although there are exemptions such as those for agricultural building and some small businesses.

“Even though this is a wholesale change in the methodology used to calculate business rates for solar when compared with the past seven years, we don’t think the hike is intentional.

“It is rather an accidental by-product of the established business rates system and how it applies to solar PV.

“This is a complex issue. We believe the methodology shouldn’t be applied to solar rooftops in this way.

“We now plan to work with the three different government departments – Treasury, Communities and Local Government and Energy – to discuss our proposals to exempt self-owned rooftop solar from business rates altogether. Ministers must act now, otherwise this tax rise will all but eliminate the incentive for businesses to invest in solar.”