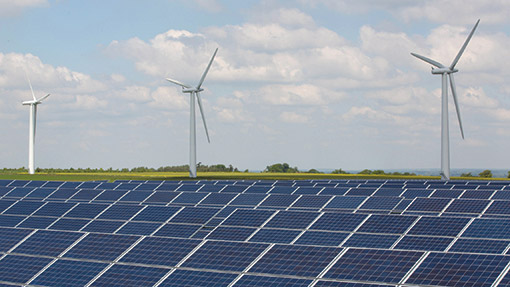 The viability of solar schemes larger than 5MW (about 12ha) has been thrown into doubt by plans to make projects compete for support with other technologies at auction.

A Department of Energy and Climate Change consultation published on Tuesday (13 May) not only changes the type of support for large-scale solar, but also brings forward the date of change by two years to April 2015. It also reduces the period of support from 20 to 15 years.

The move reflects the rapid deployment of ground-mounted solar and suggests changes to encourage more roof-mounted installations in the smaller- and medium-scale sectors.

The document proposes that from April 2015, 5MW-plus solar installations will have to bid for support under a market regime known as contracts for difference (CFD), rather than receiving support as they currently do through Renewables Obligation Certificates (ROCs).

ROCs are tradeable green certificates issued to operators of accredited renewable generating stations for the eligible renewable electricity they generate.

The plans have been criticised by those in the sector because of the damage they will do to investor confidence, returns and jobs. It also has implications for landowners looking to sign options or deals with developers.

“The viability of many of the solar park projects that we have been working on are now thrown into doubt, and this is after a lot of money has been spent on the legal process, accepting grid offers and preparing planning applications and the associated survey work,” said Harry Edwards of land agent Fisher German.

“These projects take a long time to prepare, and market certainty, which we had up until yesterday, is essential for investment in the sector.

“But all has changed now and the issue with CFDs is that you need planning and grid permissions to enter the CFD auction for an undetermined price – it’s not possible to forecast returns in advance of the planning and grid process and so developers could end up with an unprofitable or money-losing site if unsuccessful with the CFD auction process.

“It seems crazy to shut the door on such a successful sector delivering clean energy when the lack of grid capacity was surely enough to naturally slow the industry down without government intervention. I can understand they may have looked to ban sites on good-quality agricultural land, but this announcement goes against previous pledges.”

NFU chief renewables adviser Dr Jonathan Scurlock said it seemed like a punishment not a reward for using this low-carbon technology, with farmers and growers involved in about half of British solar capacity.


“Only last month, the government’s Solar PV Strategy singled out the agricultural sector for its ‘excellent progress’ in seizing the opportunity to generate its own energy,” he said.


“Farmers will continue to endorse good-quality solar deployment that supports both economic and environmental objectives in the countryside.


“DECC’s headline consultation proposal, to restrict access in the final two years of the Renewables Obligation to projects under 5MW, threatens to undermine the dramatic cost reductions achieved lately by the solar supply chain, as well as the solar industry’s commitment to high-quality multifunctional solar farms.”

DECC proposes a grace period for schemes already in the pipeline and which qualify on or before 13 May 2014, allowing some projects to access the current support regime after 1 April 2015.

With solar farm capacity currently around 2.7GW, the proposed cuts were likely to trigger a rush of developments over the next year, with up to 4GW of solar farms potentially being installed before April 2015, said Fisher German.

In the same document the government also sets out plans to split the banding for solar projects larger than 50kW under the Feed-in Tariffs (FiTs) scheme, and extend the degression period for roof-mounted solar, in order to boost deployment on commercial and industrial buildings.

DECC is also consulting on increased support for community projects under the FiTs, increasing the qualifying cut-off point from 5MW to 10MW, and allowing community projects to access separate grant money, to help secure upfront capital.