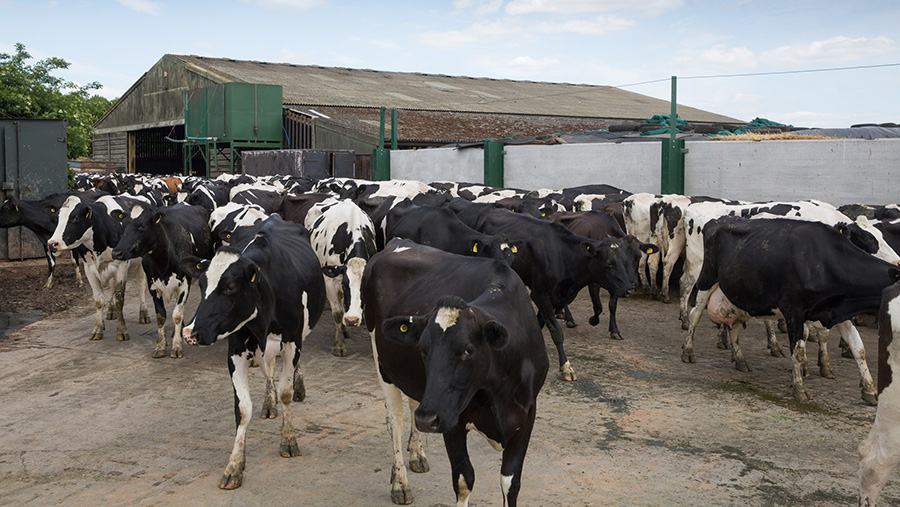 A spring “tsunami of milk” is threatening further downward pressure on prices with no sign of any recovery in dairying, a leading analyst has warned.

Chris Walkland, of the Walkland Partnership, said the spring flush would add further pain to dairy farmers and inflict “horrendous” pain on the industry this year.

Milk prices, which have plunged by about one-third since mid-2014, would likely drop further this spring piling on the misery for struggling dairy farmers, he added.

“It’s going to be pretty horrendous over the next three months,” he told delegates at a dairy update session at NFU Conference in Birmingham on Tuesday (23 February).

“If you take past history, what dairy farmers have produced over the past decade, and apply it to the past three or four months, the flush will be about 4bn litres from April, May and June.

“We will peak higher than we did last year.

“There will be 30 days when milk [production] is higher than 44.5m litres.

“There will be 77 days consecutive days when it is higher than what the processors have normally been used to processing.

“I estimate the spot price will be about 10p/litre and you can look forward to a B price of milk of between 6 and 10p/litre.”

Figures based on the estimated UK milk production from April to June showed  dairy farmers would make £790m during this period, down 37% from £1,250m during the same “peak” period in 2014.

Dairy farmers need to be paid 28-30p/litre to cover the cost of production.

But Mr Walkland said all the indications were that the milk price would drop further this spring by an additional 1.5p/litre – and it could stay there at least until the end of the year.

Global factors adding to the crisis in dairying included reduced demand for dairy products in China – equivalent to a USD2.89bn (£2.07bn) fall since January 2014 – and hardly any demand from Russia since its president Vladimir Putin banned EU agri-food imports, including dairy, in August 2014.

By August, he predicted UK dairy farmers would receive average milk prices of 20.5p/litre – and non-aligned prices could fall to 19.2p/litre on average.

“Production is massively out of kilter with demand,” he said.

“There is not enough money coming in to the supply chain at the top of the hopper.

“Non-aligned farmers are subsidising the aligned and the rich are getting richer at the expense of the poor.”

Mr Walkland described the UK dairy industry as “production obsessed” and not focused enough on the consumer.

He added: “It is often forgotten that you are paying the price of the politics between the EU and Putin.

“We need to keep banging on to the politicians about this fact.

“They are saying: ‘There is too much milk out there, that’s the problem.’ Well, one of the reason the price has crashed is because of politics.”

Mr Walkland urged the dairy industry “not to forget the value of dairy products”, especially at a time when alternatives, such as almond and soya-based drinks, were being heavily promoted.

Outgoing NFU dairy board chairman Rob Harrison said: “This is not a UK-only situation. This isn’t SOS Dairy like it was a few years ago.

“Dairy farmers across the world are in the same conundrum and facing the same challenges as you and I.

“Global milk supply has been growing at a steady 2-3% and this has been hit by a number of demand shocks that are completely out of the control of those of us in this room.

“I’m not going to repeat the story of the ‘perfect storm’, other than to say the storm has got a lot worse.”

Mr Harrison urged farmers to seek out “better-than-ever” relations with their milk buyers to understand each other’s needs.

He said: “We have got a crisis based on supply and demand and the only way I can see us managing to align supply better with markets is by mature producer organisations.”