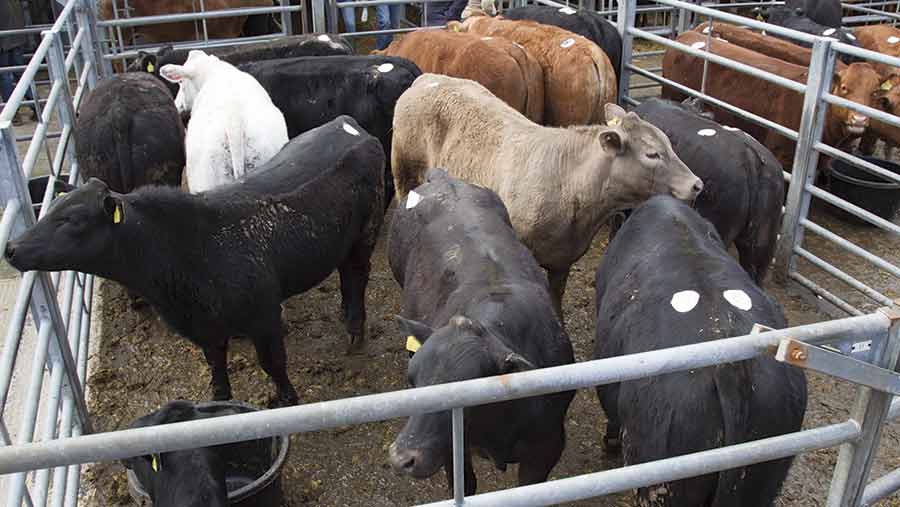 Store cattle prices have held up well this year, as the healthy finished market has kept confidence in the trade.

Plentiful numbers have been met by strong demand, which has helped the value of yearlings to surge in the first five months of 2017.

In January, a one-year-old Hereford-cross steer was worth £623/head in England and Wales, based on the average of weekly data collated by the Agriculture and Horticulture Development Board and analysed by Farmers Weekly. In May, it was selling for £709/head.

Over the same time, the average price of a continental cross yearling steer rose by almost £35 to £905/head.

The value of older animals has stuck firm or shifted slightly, but prices have all improved on 2016 levels.

In May, a two-year-old Hereford steer averaged £918/head – more than £50 a head higher on the year. A continental-type steer was worth £78 a head more.

His market report noted a higher entry meeting a “tremendous trade”, with a packed ring of buyers “exceptionally keen to secure supply”.

He told Farmers Weekly that some farmers should consider selling some cattle now, even though many would typically turn unsold animals onto grass until the autumn.

“We have had a fantastic year so far,” Mr Venner said. “Our throughput is slightly up, but we are pulling cattle from further afield, so other places must be down.”

“Unlike last year, the finished price has improved, so that has kept demand among the store cattle buyers high. We have had a bit of ‘grass fever’, which we have not seen for possibly three or four years, but that is there because [buyers] can see the finished trade is good.”

The improved trade has come despite healthy numbers arriving at marts.

Those continental types still represented 60% of all stores sold, although this share has been creeping downwards in the past two years.

AHDB’s report on the data said the difference between the prices for yearling and two-year-old stores had shrunk since the start of the year.

“Against a background of increasing feed wheat prices this indicates that margins may be tightening, and demonstrates the higher risk strategy for those store cattle producers who rely on increasing store cattle values,” said the levy board.