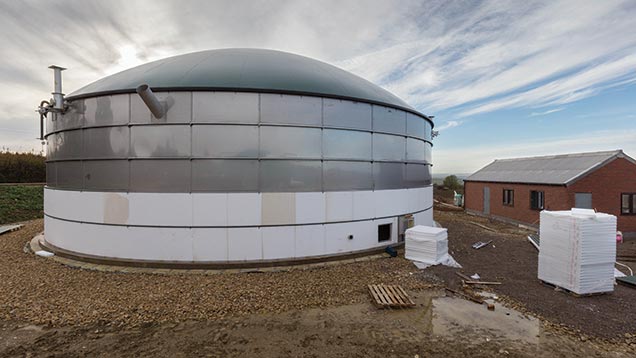 The UK biogas sector has grown rapidly in the past year. However, concerns about future support and the effect of forthcoming feedstock sustainability rules mean an uncertain future for the several hundred plants in the pipeline, according to a report.

The National Non-Food Crops Centre’s (NNFCC) annual anaerobic digestion report shows 185 AD plants are operational in the UK (excluding sewage-based AD), compared with 138 a year ago.  More than half of operational plants use farm-based feedstocks (for example, manures, slurry or crops).

About 500 further plants are in the development pipeline, including some at early project proposal or where planning has been submitted.

See also: Small-scale ad has a place on UK farms

It is uncertain how many of these will be built. The AD sector typically sees 50% of planned plants become operational, with finance, planning and feedstock supply the main reasons for failure. Further support cuts together with new feedstock sustainability rules will do little to improve this.

Making the most of waste

“Feedstock is key to future expansion,” says the NNFCC’s Lucy Hopwood, who suggests AD development is moving away from large centralised waste-fed facilities to smaller projects on farms or food manufacturing sites where feedstock is more secure and consistent and there is often on-site energy demand.

Concerns about availability of additional food and agricultural waste can be overcome with appropriate government policies and support, she says.

Agricultural waste is relatively untapped, with AD processing less than 1m tonnes of the 90m tonnes of manures and slurries produced each year in the UK. “This isn’t an accessibility challenge, it’s a financial one.”

Feed-in Tariffs (FiTs) cuts over the past year have hit small- and medium-scale AD hard, and although the industry is developing cheaper technology offering better returns, the rate of change is behind the support cuts, she says.

“Most AD plants still need support, so the FiTs review later this year will be key to the future development of the industry.”

The food waste challenge is more about access to feedstocks – additional policy measures or separation and collection infrastructure is needed to overcome this, says Ms Hopwood.

From October 2015, all non-waste feedstock such as maize, grass silage and energy beet must meet sustainability criteria in order for new and existing AD plants to qualify for Renewable Heat Incentive (RHI) or Renewables Obligation (RO) funding. The criteria do not apply to FiTs.

Feedstocks must deliver at least a 60% greenhouse gas saving over fossil fuel equivalents and separate emissions thresholds have been set for heat (34.8g CO2/MJ) and electricity (79.2g CO2/MJ) generation.

“The AD industry is fairly comfortable with the electricity threshold, as it would have to be a pretty poor feedstock to fail, but there is concern about the heat level,” says Ms Hopwood.

Under Ofgem’s default values for sustainability reporting many crops don’t meet the required threshold for heat generation and so would be ineligible for RHI or RO payments on the proportion of energy produced from that feedstock, she says.

The default values can be overridden, so that actual data on variables such as crop yield, fertiliser and fuel use is submitted, but this means extra paperwork for AD operators and those supplying feedstocks.

“Many farmers and operators record a lot of the data in some way already, so it may be a case of pulling it together differently. How that works will vary, though.”

The sustainability requirements also raise potential issues about what happens if crop yields are worse than expected due to poor weather, she adds.

“Ofgem is due to issue guidance in the summer, but that doesn’t give people much time to prepare and there are still a lot of nuances in the methodology to be ironed out.”