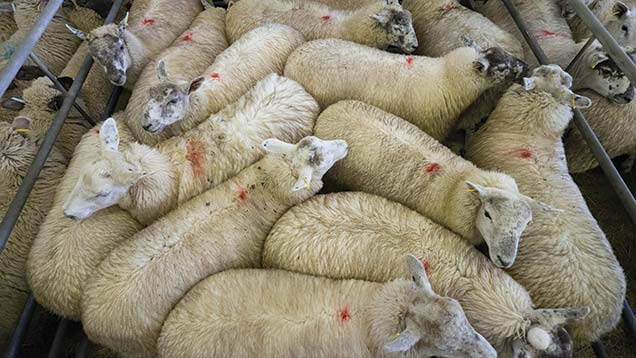 The lamb market is “fundamentally sound”, but UK prices are being hampered by the pound’s strength against the euro, according to new analysis.

AHDB head of beef, lamb and pork exports Jean-Pierre Garner said current exchange rates were hurting both the value and volume of the UK’s sheepmeat trade.

Sterling has strengthened 21% against the euro since August 2013, with the rumbling Greek crisis keeping pressure on the single currency.

Speaking at AHDB’s meat export conference, Mr Garnier said other challenges, such as a burst in Spanish production and higher New Zealand imports this year due to drought, were temporary.

“That will feel much better,” Mr Garnier said. “We have been through a flush of New Zealand lamb that has affected the market, but it is over.

“In sterling, [current prices] are terrible, but in euro terms the market is fundamentally sound.”

Below you can see UK deadweight lamb prices converted to their euro equivalent in each week.

It shows that the 2015 season holds up fairly well, compared with recent years. But the sliding euro has caused what British farmers get paid – in pounds – to feel much worse.

The UK sheep sector is highly exposed to disruption in the EU, according to one processor.

“We are very exposed to what is happening in Europe. We need to have access to more markets.”

Other factors would still weigh on UK lamb prices for the rest of the season, however.

Mr Garnier added that weaker demand in China and the lower oil price had cut returns from products such as skins, guts, tallow and wool.

And though New Zealand imports dried up in April, there are reports of another large shipment arriving in the UK.

Independent consultant Lionel Colby told the conference the UK had the chance to build on its strong export position in the future.

British sheepmeat totalled 9% of world exports in 2013, behind New Zealand and Australia with one-third each.

In the most likely scenario, China, the Middle Eas,t north Africa and the US would be importing more, he said. Australia would be the first to meet the demand.

But if consumption grows above that estimate, the UK could grab some of the extra business and benefit from rising prices, My Colby said. Higher-value cuts would still go to Europe, but “fifth-quarter” sheepmeat could go to China if the UK gains market access.

“The UK would get an increasing slice of the action in terms of exports. There are supply constraints [in New Zealand and Australia]. Where is this product going to come from if demand increases?”