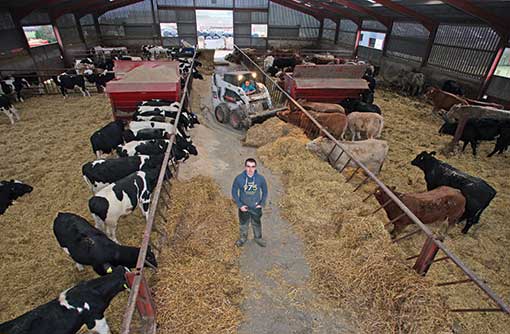 Having children who are passionate about farming and wish to take on the family farm is a position most farmers would envy.

But when Howell Powell’s two youngest sons decided they wanted to farm at home full time, the family had to make changes to accommodate Ben, 22, and Jake, 18. So they made plans to diversify into bull beef finishing in order to earn enough capital to expand their enterprise.

“We were looking to buy another farm locally,” explains Howell, who farms Llwyngwillym Farm, Rhayader, in partnership with his wife Liz. In order to raise the finances Howell sat down with his consultant Peter Long to prepare a detailed business plan.

After working out the business costs and potential, Mr Long advised the family to start finishing dairy bulls for a quick cash turnaround and to maximise profits a hectare.

“A lot of the sheds are empty, except during the winter and at lambing time, so we had sheds that were just wasting,” explains Ben.

Fast-forward 10 months and the family is now in the process of finishing a rolling herd of 400 dairy bulls.

They purchase bulls from markets and direct off dairy farms. Type is key and the family’s priority is to select animals with good conformation.

“We look more for British Friesians opposed to Holsteins because we don’t want anything too extreme,” explains Howell, who says animals that are good on their feet is also a must.

Having purchased their first load of animals in April, their journey into finishing dairy bulls has been a steep learning curve. And despite the fact the family has always finished progeny from their 110-head continental suckler herd, they admit dairy beef has been more of a challenge.

They originally bought calves and reared them on ad-lib milk from automatic feeders, but found the system too intensive and now only purchase weaned animals.

“We tried 50 on the machine between seven and 14 days old, but decided it would be easier to buy in animals from 12 weeks upwards,” explains Howell.

With animals arriving at different times and a number of mixed ages, high health status is also paramount.

On arrival calves are vaccinated against pneumonia and they receive a second treatment one month later. “We also try to keep each batch together because when you mix them they will start fighting,” adds Howell.

Bulls are housed on loose straw in groups of 20, but group sizes are reduced to 12 when the bulls reach eight months to reduce stress and prevent any subsequent loss in daily liveweight gain.

“We try to keep it well ventilated, because they are receptive to respiratory problems. We had to treat a few calves for pneumonia because of the stress of moving them and the mild weather; it doesn’t take much to upset them,” adds Howell.

A total of 20ha of home-grown barley is balanced with a bought-in 35% protein blend, which is mixed on farm by a mobile mill-and-mix machine.

Bull calves start on a high-energy ration of 17% crude protein (CP) until four months of age to maximise skeletal growth and muscle conformation.

This is gradually replaced with a 14% CP blend, 41% starch and sugar and a digestible undegradable protein (DUP) content of 29%.

Wheat straw is offered ad-lib to aid rumen function. “The rumen needs effective scratchy, long fibres to get the rumen bugs working to their optimum and because we are feeding such a high-starch diet, the inclusion of yeast is vital to reduce the risk of acidosis,” she adds.

Once the grain runs out, the diet reverts back to the complete balanced bought-in 14% CP blend.

Providing the bull costs add up, the family hopes to cut down suckler cow numbers, which will enable them to grow more barley and reduce bought-in feed costs.

With such tight margins there is no room for error, so attention to detail is key.

“For example, at 500kg liveweight our expected feed:weight gain ratio would be 7:1, which is sustainable, but once this reaches 580kg liveweight this ratio increases to 9.9:1,” adds Mrs Griffiths-Jones.

To achieve this 560kg liveweight target the animals need to be attaining daily liveweight gains of at least 1.35kg/day.

“The feed intake per animal increases as they get older and ranges from a typical 7kg of blend at six months to a 12kg intake per head per day at 13 months or at finishing weight,” says Mrs Griffiths-Jones. The ration costs 22p/kg, so this accumulates to a daily feed cost of £1.54 a day at six months, rising to £2.64 a head at finishing.

The family is looking at the options to sell liveweight or deadweight through the abattoir.

Although the Powells weren’t successful in buying the farm as hoped, they’re still on the lookout for another one. Providing they hit these targets they are hoping to achieve a £200 a head profit, which will help them expand the bull beef enterprise to the new unit.

“The figures look good on paper, but the evidence will be in selling some,” adds Howell.

Long term, the family hopes it will help them ride out the challenges caused by changes to single farm payments.

“It [SFP] is going to be less money and eventually it probably won’t be here at all,” Howell says. “You have got to go with the times and where the money is.”