One of the many new additions to the Suggitt fleet has been this 200hp JCB 3220 Fastrac. A front/rear mower combination has extended the firm’s offering.

Things are at a standstill in the yard of Suggitt Farm Services. Much like the rest of the east of England’s farmers and contractors over the week, they have been brought to a standstill by heavy rain. 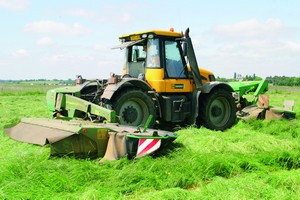 It is a big change from earlier in the month when the firm was flat out mowing silage for first cut.

This has been a new workload for the expanding firm, having taken over the mowing operations for a local contractor.

Giving a 6.2m cut, Mr Suggitt believes that in the right conditions the machine can get more than 60ha (150 acres) a day.

“Considering that rig has a running cost of £14/hour on fuel alone, it’s easier to understand the importance of getting on with work when the weather is good,” he adds.

That is not the only kit the firm has invested in over the past year a brace of New Holland 930BB mini-Heston balers have been added to the fleet as Suggitt Farm Services increases its annual baling workload.

“We put 7500 bales through a New Holland 930BB last year, and with an order for another 10,000 this year, we’re awaiting delivery of a second machine any day now,” says Mr Suggitt.

Running these two balers as well as a larger New Holland 980 Heston machine has meant the firm is considering investing in a bale chaser to maximise the use of staff and resources.

“We moved all the bales last year with the JCB telescopic handler and a trailer, but running three balers this year will mean we need a chaser to keep up, so we’re looking at the options,” says Mr Suggitt.

Naturally, all these bits of kit need a tractor to pull them, and to that note the firm has also been investing in new kit.

“We were hit with a couple of hefty repair bills on our 2002-reg John Deere 6920s. When we added up the costs it was almost the finance on two new tractors, so we opted for a pair of new 6920s.”

Apart from the Deere units, a new addition to the farm has been an ex-demo 3220 JCB Fastrac, which is coupled to the John Deere mowing rig.

Another Fastrac is working on the firm’s pig units, which caters for 6500 animals.

The 2170 Fastrac handles a Stoll loader and a Teagle straw chopper on the three rented farms that used to raise pigs from four weeks to 21 weeks.

“The pigs are core to the contracting business, it’s a regular income on a monthly basis, which keeps the firm going in quieter times and fits in well with our straw operations,” adds Mr Suggitt.

Speaking of straw, the business is set to handle 40,000 bales this year, and with that in mind Mr Suggitt is looking forward to a busy harvest.

“If we can get as good a year as last, then we’ll do all right,” he concludes.