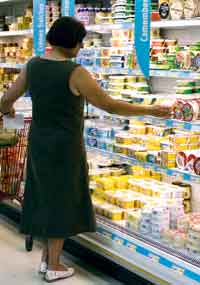 Supermarkets have been failing to pass on the dramatic falls in dairy product prices to their customers, so hindering any recovery in the dairy sector.

According to a new market situation report from the EU Commission in Brussels this week, “The pronounced fall in the prices of milk and dairy commodities since the end of 2007 has only triggered a slight decline in consumer prices for dairy products.”

The commission’s figures show that, over that period, the wholesale butter price has dropped by 39%, skimmed milk powder by 49%, cheese by 18% and milk by 31%. Yet the price consumers pay in the shops for dairy products has dropped by just 2%.

“The magnitude, the delay and asymmetry in the downward adjustment of dairy consumer prices clearly shows that the EU dairy supply chain does not function efficiently,” it says.

“Preventing consumers from benefiting from lower prices constrains the development of demand for dairy products and thus hinders the strength and pace of recovery.”

As a result, the EU Commission has called for greater market transparency and fairer market distribution. It is also stepping up its efforts to weed out anti-competitive practices in the dairy sector.

“We have to do all we can to help our milk producers, who are having to deal with a dramatic fall in prices,” said EU agriculture commissioner Mariann Fischer Boel.

The EU Commission also identifies other measures needed to help stabilise the dairy market.For example, it has already proposed the extension of intervention purchasing for another 13 months, and reactivated export refunds. It is also looking to improve the school milk scheme and boost dairy product promotion.

More controversially, it has suggested allowing state aids of up to €15,000 (£12,900) per dairy farmer, and fining milk producers who exceed their quotas to create a fund for an outgoers scheme.

But the commission is adamant that it will not cut milk quota, as some farm groups have demanded, pointing out that milk production is already 4% below quota.

Increasing intervention prices is also dismissed. “This would be a reversal of the last 15 years of CAP reforms.”

Farmer groups have generally welcomed the commission’s report. The NFU described it as “a proportionate short-term response”. “We have to make the market work better for farmers, not look to outdated, crazy ideas such as cutting milk quotas, which are irrelevant to today’s problems,” said dairy board chairman Gwyn Jones.

EU farmers’ group COPA-COGECA called for a “budget for 2010 which will ensure the dairy sector’s survival”. But Conservative agriculture spokesman in the European parliament Richard Ashworth warned against “a return to butter mountains and milk lakes”.