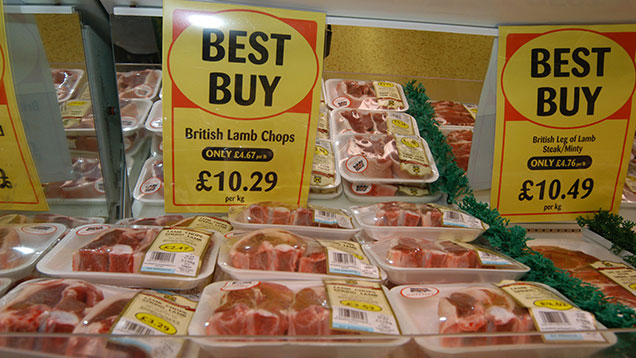 Supermarkets are stocking more British beef and lamb than last year – despite the collapse in farmgate prices.

The findings suggest 2015’s severe price pressure has come more from the strength of the pound, along with healthy cattle and sheep supplies.

“I think credit should also go to those retailers who consistently score highly in our research in terms of stocking British lamb.”
Stuart Roberts, AHDB Beef & Lamb

Beef prices are steadily building after an early year slide, but lamb values remain on the floor with little hope of recovery this season.

Aldi, Budgens, The Co-operative, Lidl, Marks & Spencer, Morrisons and Waitrose were all stocking only British beef in June, according to the survey.

Lamb results are harder to compare as stores use different sourcing periods for British lamb.

In June, the Co-op came bottom with just 38% of UK shelf facings, with Sainsbury’s next at 54%.

Asda, which last week promised to step up its support for British lamb producers, was two-thirds British.

AHDB Beef & Lamb chairman Stuart Roberts said he had written to congratulate the supermarket on the decision.

He has also offered to repeat the survey in six weeks’ time to see if Asda’s score had improved.

“I think credit should also go to those retailers who consistently score highly in our research in terms of stocking British lamb,” Mr Roberts said.

“Aldi, Budgens, Morrisons and Waitrose were all found to have 100% British in the June survey.”