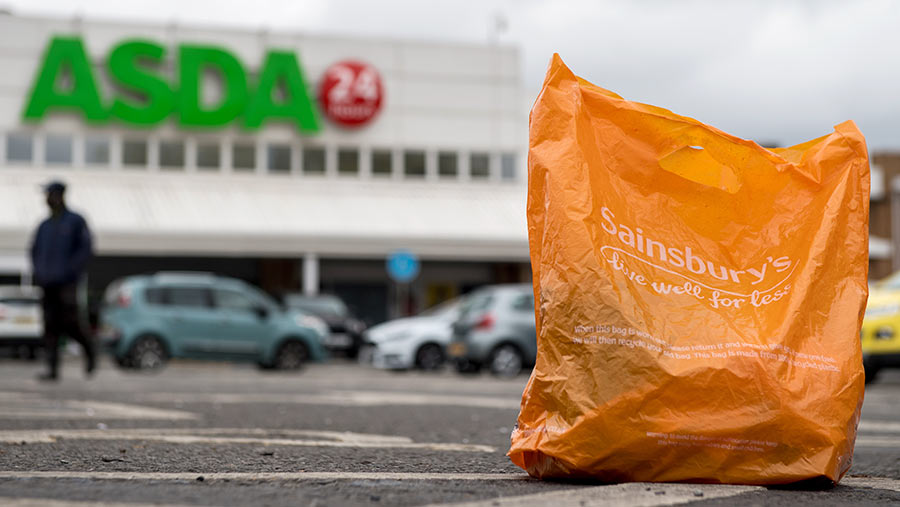 Farming industry representatives have reacted with concern to the news of the proposed merger between UK supermarket giants Sainsbury’s and Asda.

The move would tie up almost 30% of the country’s retail market and create the biggest supermarket in domestic history.

A statement from Sainsbury’s on Monday morning (30 April) promised to shave about 10% off prices for everyday items as well as streamlining supply chains, leading to concerns from suppliers over where these efficiencies will come from.

On completion of the deal, the new mega-retailer expects to make £500m of efficiency savings, £350m of which are expected to be generated from access to better harmonised buying terms.

But Jack Ward, CEO of the British Growers Association, which represents vegetable and salad growers, said any savings would likely be passed down an already squeezed supply chain.

This is not good news for suppliers Jack Ward, British Growers Association

“This is not good news for suppliers,” said Mr Ward.

“We have two major concerns. Firstly, we are losing two major buyers and gaining a huge one so there is a big element of competition disappearing here.

“The second is the deal is promising reduced prices for consumers – but where is that going to come from with an increasingly unsustainable supply chain?”

Mr Ward added the greater buying power from the new mega-retailer would mean it would expect better deals and cheaper food from suppliers.

“Food cannot continue to keep getting cheaper in the UK the retail sector is already immensely competitive.”

The latest sales figures for the two supermarkets – 2016 for Asda and 2017 for Sainsbury’s, showed a combined revenue of £50.6bn, but pre-tax profits of only £1.2bn, highlighting the tightness of margins in the UK retail sector.

Benefits of the deal?

“One of the potential benefits would be if more British produce were to be sold as a result of the merger,” said Mr Ward.

However, in a recent Farmers Weekly lamb watch survey, both supermarkets were brought under the spotlight for their lamb stocking policies, with Asda being singled out for its lack of supply chain transparency.

The Walmart-owned retailer also came under criticism in July of last year, being voted joint last alongside Iceland for fair dealing practices with suppliers in a study carried out by the Groceries Code Adjudicator (GCA).

In September 2017, the GCA ruled Asda treated hundreds of its suppliers unfairly, wrongfully charging them large sums to retain their contracts. The supermarket was made to pay a lump sum to those affected.

The merger will now be subject to a formal investigation by the Competition and Markets Authority to see if the deal will reduce competition and choice to consumers which could take a number of months.