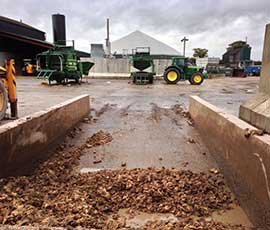 Cereal price volatility and lack of expansion opportunities has led one arable grower to transform his business into a self-sufficient anaerobic digestion (AD) operation.

For Henry du Val de Beaulieu, it makes more sense to have the financial security of producing energy with an index-linked income for 20 years, than growing commodity crops with prices dictated by the global market.

Apsley Farms near Andover is 465ha, of which 100ha is rented, and has been transformed into an energy production farm through a £3m investment in a 0.5MW AD plant.

Unlike many other UK plants, this one has a hydrolisation feed-in system, which means the first stage of digestion takes place in a separate tank, improving efficiency by speeding up the digestion process.

Annual turnover for the plant is £750,000 and once Mr du Val’s expansion plans are realised (see “Aspley Farms’ plans”, right), will see payback within five years. Finance was arranged over 20 years through the Agricultural Mortgage  Corporation.

The long-term goal is to convert the plant to run on waste (this will require further planning consents and an Environment Agency licence), returning arable land to cropping destined for the feed market. However, the plant is fed on home-grown silages produced from wholecrop wheat, sugar beet and maize. These are baled rather than clamped.

“We all want to use waste but you start by growing crops to fulfil the business model,” explains Mr du Val. “If you cannot demonstrate that you have got the feedstock sown up you are not going to get the planning or the cash.”

From next year however, a big jump in capacity as the project expands will mean more feedstock being bought in and feed wheat introduced as the main feedstock. Mr du Val will buy this in on the open market, not only reducing his feedstock supply risk but also distancing the AD operation from the food versus fuel debate which has extended to discussion of the effect of maize for AD on farm rents.

An application costing £9,000 in planning fees was submitted in September 2010 and granted in March the following year. Building work began in November 2011 and the plant was fully operational in October 2012.

Gaining planning permission for the project was a challenge, as it was initially recommended for refusal. However after engagement with and explanation to local councillors who were supportive of renewable energy, planning was granted at a planning committee meeting.

Mr du Val says he was lucky the farm had access to a 0.5MW connection point to the electricity grid on the farm, however connection between this and the plant was costly at £46,000 for just over 27m of electrical connection wiring.

Feed for the digester goes into the hydroliser four hours before it moves to the main tank. The daily mix is 2.5t wholecrop wheat silage, 16t maize silage and 14t beet silage.

“The perfect temperature for hydrolysis is 28-29C. Air is blown through the whole tank to arrest any methane production. Twenty minutes before feeding the tank is left without aeration so that no oxygen is introduced into the digester. This process drives the pH down to about 5.7. By putting the beet in we are getting a pH as low as 4.6,” explains Mr du Val.

“Reducing the pH cracks open the cellular structure of the material and makes it readily available to the bugs in the digester. It’s more efficient and reduces the retention time in the digester.”

Digestate, which is separated into liquids and solids, provides 70% of the farm’s fertiliser requirements, reducing growing costs significantly.